Grace, her daughters Maggie and Isabella, and Tom Cahill have bonded after Sam’s death. One night, Grace and Tom kiss. In Afghanistan, Sam’s captors order him to kill his fellow prisoner John Willis. They tell Sam that, if he does not, they will kill both of them. When a gun is held to his head and cocked, Sam picks up the pipe and beats Willis to death. The Marines rescue Sam sometime later. The entire family is happily reunited. A few days later, Sam abruptly asks Tom if he slept with Grace. Tom tries to reassure him but Sam is unconvinced.

We see Sam is still carrying a gun. Sam tells Grace he thinks she slept with Tom. She confesses they only kissed; Sam says he still believes they had sex. On Maggie’s birthday, Isabella’s resentment about her father’s absence boils over. She asks why he couldn’t just stay dead, and says her mother would rather sleep with Tom anyway. Later, Grace questions Isabella and both girls make it clear they prefer Tom to the “new” Sam. Grace insists he will get better.

Sam is in the backyard throwing things at a barking dog next door. Tom and their parents get a call from Grace and he leaves while their mother orders their father to call the police. Sam goes inside, takes a fire poker and begins destroying the kitchen. He rants about what he had to do to make it back to Grace and the girls. Tom shows up and briefly calms Sam, but when he hears police sirens, Sam panics and pulls his gun on Tom. Sam goes outside as the police arrive, waving the gun  and firing shots in the air. He puts the gun to his own head before turning to Tom saying “I’m drowning, Tommy.” He drops the gun and is arrested. Sam is shown at a mental health center. He calls Tom, saying he thinks everything will be fine. Sam meets with Grace, who is begging him to talk to her. A long time passes and Sam confesses to Grace that he killed Willis. The camera zooms out on them still talking, and a narration by Sam says only the dead have seen the end of war. 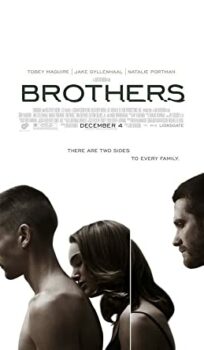