Based on a true story, Henry Brubaker (Robert Redford) has been hired as the new warden of the Wakefield State Penitentiary in Arkansas.  In order to see the alleged rampant corruption at the prison first-hand, he arrives disguised as a prisoner.  For about two weeks, he sees abuse of the prisoners from both guards and other prisoners, sexual assault, torture, worm-ridden food, and corruption and graft from the staff.  Once he reveals his identity, he begins to implement reforms that will improve the human rights of the prisoners and bring an end to the long-time use of the prisoners as slave labor to the local businesses.

With the assistance of several long-term prisoners, his initial attempts at reform are successful.  These include the banning of assaulting the prisoners, giving them real food to eat and teaching them how to grow their own crops, and ridding the prison of contracts from corrupt businesses.  However, Brubaker is getting resistance from not only the local businesses that rely on the prison to make their money, but also from the state prison board.  They’re losing kickback money from the businesses because Brubaker is no longer allowing them to use the prisoners as workers.  The board threatens to fire Brubaker unless he eases off of his reforms and allows the use of the prisoners as workers again.

One day, Brubaker learns of the location of hundreds of unmarked graves of prisoners.  After the bodies are exhumed, it’s quickly determined that they were murdered by the guards and other prisoners and the bodies were hidden.  One of the guards, fearing he will be tied to some of the deaths, tries to escape custody, but is killed by Brubaker in a shootout in the nearby town.  This shootout is the excuse the prison board uses to fire Brubaker and hire a new warden, who promises to return things at the prison back to the way they used to be.  As Brubaker is leaving the prison for the final time, all of the prisoners turn away from the new warden (who is lecturing them in the courtyard) and give Brubaker a long ovation.  At the very end of the movie, it’s revealed that, two years after Brubaker was fired, some of the prisoners sued the prison.  The judge ruled that the treatment of the prisoners at Wakefield was unconstitutional and ordered the prison to be reformed or closed. 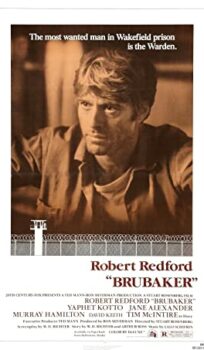