Submitted by Eytan (Pooper) and Evan B (Longer)

Pooper:
Elvis (Bruce Campbell) and Jack (Ossie Davis) manage to kill the mummy, both suffering fatal wounds in the process. However, their heroic deaths ensured the safety of their souls, as well as those of the rest of the inhabitants of the rest-home. We never learn if Jack was really president Kennedy or not, though Elvis seems to believe him at the end.

Long Ending:
The film opens with Elvis Presley (Bruce Campbell) still alive and residing at a retirement home in the middle of nowhere in the southwest. His privates no longer work and none of the nursing home staff take him seriously. His family and friends don’t know he is alive and he wonders whether they’d even care. Virtually no one else in the nursing home has relatives that care for them. When his roommate passes away, the roommate’s niece almost throws away his purple heart until Elvis saves it.

It is revealed through flashbacks that Elvis grew tired of his oppressive fame and rotten lifestyle, so he set some money aside and wrote a contract where he switched places with an Elvis impersonator named Sebastian Haff. He claims it was Haff who died on the toilet while pretending to be Elvis. Meanwhile, his contract was burned up in a fire and he ultimately had to work as an Elvis impersonator himself in order to make a living. He was enjoying his gig as it was once again about the music (and sans the burdens of fame) when he broke his hip and ended up in the nursing home. The only person that believes Haff is really Elvis is an African-American resident named Jack (Ossie Davis). Jack believes he is actually President John F. Kennedy. He claims that after he was shot, his body was died black by the government and the missing part of his brain was replaced by sand. He claims it was all a conspiracy set up by Lyndon Johnson to take the Presidency. Even Elvis/Haff has a hard time believing JFK’s story.

One night, an elderly woman is attacked by a scarab beetle that begins biting her flesh. She fends it off but is then attacked by a mummy (Bob Ivy) dressed in cowboy regalia. She is found dead the next day. A few nights later, Elvis is attacked by the scarab beetle, but he manages to kill the bloodthirsty bug. Feeling energized, Elvis’ manhood even awakens and stands at attention. The next night, Elvis finds JFK collapsed on the floor with his pants down. JFK explains that he was attacked by a mummy. Being knowledgeably about the occult, JFK tells Elvis that in ancient Egypt, the mummification ritual could be used to preserve the dead. However, the mummy could only remain undead if they feasted on human souls. The mummy can suck the souls out of any orifice, but JFK notes that this mummy is a bit of a freak and prefers to suck the soul out of people’s butts (thus why his pants were down).

Elvis at first dismisses his theory, but JFK shows him that someone left hieroglyphic graffiti on the wall of a bathroom stall calling Cleopatra a slut. They theorize that if the mummy eats your soul, the soul doesn’t go to Heaven but is digested by the mummy and pooped out (thus why the mummy was using the toilet). Their theories are confirmed when they actually witness the mummy walking through the hallways one night. When he sees the mummy, Elvis gets a psychic whiplash where he learns that the mummy’s sarcophagus was stolen and the thieves crashed their getaway vehicle in a nearby creek, freeing the mummy. JFK confirms that such an event happened after reading through news archives and finding a story of thieves stealing the sarcophagus of one of King Tut’s brothers. They theorize the mummy has taken residence in the nursing home and feeds on the elderly as no one will question why so many old and forgotten people are dying. Feeling like he must finally stand for something, Elvis decides to try and destroy this Bubba Ho-Tep (slang for a redneck mummy). JFK resolves to assist him.

They steal several supplies and go out to confront Bubba Ho-Tep. Elvis  brings along his former roommate’s purple heart. JFK and Elvis are separated and Bubba attacks JFK and begins sucking out his soul. Elvis is able to briefly knock Bubba out, but JFK dies from his wounds (thankful that Bubba did not eat his soul). Elvis then attacks Bubba one more time. After a tumble down a hill, during which Elvis is mortally wounded, he lights Bubba on fire and destroys the mummy once and for all. Elvis dies peacefully, knowing he finally stood for something, and that his soul won’t be reduced to a mummy’s poop.

After the credits is an announcement for Sebastian Haff’s return in a film called “Bubba Nosferatu.” 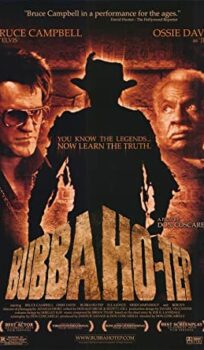