A bullet train going from Tokyo to Kyoto is boarded by a number of assassins. Ladybug (Brad Pitt) is there because his handler Maria Beetle assigned him to recover a briefcase. The briefcase was brought on by “twin” brother assassins Lemon and Tangerine (Brian Tyree Henry and Aaron Taylor-Johnson), hired by Russian crime boss White Death (Michael Shannon) to recover his junkie son. Unfortunately, the son is poisoned, and the brothers believe Ladybug did it. A young schoolgirl assassin called The Prince (Joey King) lured Yakuza member Yuichi Kimura/The Father to help her kill White Death by pushing Yuichi’s son off a roof and leaving him in a coma. Another assassin, The Wolf (Bad Bunny), tries to kill Ladybug after believing he was responsible for poisoning his wife and cartel boss at his wedding, while one final assassin, The Hornet (Zazie Beetz), has stolen a deadly snake to use its poison on her victims.

Wolf accidentally kills himself fighting Ladybug when his knife bounces off the briefcase and into his heart. Hornet tries to poison Ladybug, but he poisons her too and steals her antivenom before she can use it, leaving her to die. Tangerine is killed in a gunfight with Ladybug. Yuichi is joined by his father, The Elder, who has Prince’s henchman killed before he can touch his grandson. Ladybug, Lemon, Yuichi, and The Elder are left to work together to confront White Death.

When the train arrives in Kyoto, many revelations are made. First, Prince is White Death’s daughter who wants to kill him for not giving her the same attention he gave his son. Next, White Death arranged for all the assassins to be there as a result of his wife’s death, which was part of a failed assassination attempt on him. He lured Lemon and Tangerine there because they killed his men in Bolivia and was counting on the son to die because he blamed him for causing his wife’s death for bailing him out again. Hornet poisoned the surgeon that would have saved White Death’s wife, and he believes that Ladybug is the assassin that orchestrated the hit, even though it was the guy Ladybug was filling in for on the job.

The showdown takes place as Lemon causes the train to go too fast. The Elder battles White Death, as he was responsible for the death of his wife after White Death seized power from The Elder’s former boss. Ladybug and Lemon kill White Death’s men before Lemon jumps out of the train with the last henchman. The train derails and crashes into a nearby town. White Death tries to kill Ladybug but gets his head blown up because he grabbed a gun rigged by Prince to explode when the trigger is pulled. Prince is also killed by Lemon, who survived his fall and hijacked a tangerine truck to avenge his brother. Maria then shows up to rescue Ladybug while the Kimuras return home. 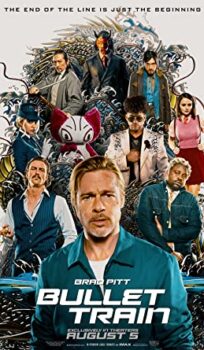