On the day of his wedding, Sheriff Pat Garrett (Rod Cameron) must go after bank robbers Billy Clanton and George Clanton.  The Clantons think they are safe after crossing into Mexico.  Fed up with lawlessness, Garrett follows them across the border and arrests them.   The Mexican Federales do not take kindly to his actions, and want to arrest Garrett. A Mexican gang learns that Garrett is now carrying back the money from the bank robbery. Garrett has to bring the Clantons back alone across the desert, with the Federales and the gang in pursuit.

Billy Clanton is a hard evil man.  He dumps out their water in the middle of the desert, as he prefers to die of dehydration in the desert than hang, and he prefers to have Garrett die with him.  Billy steals a horse and escapes.  The mexican bandits think he has the money.  They chase and kill him.  Garrett and George take refuge with a ranch family.  Away from Billy, George’s good side comes out. The bandits attack and burn down the ranch house.  Garrett and the family take refuge behind the wagons.  More bandits arrive, and they are badly outnumbered.  George disappears in the night, and they think he has abandoned them.  The standoff lasts to the next afternoon.

Just as Garrett decides they have to surrender to the bandits, George arrives with the US cavalry.  The head bandit rides off with the money from the bank robbery.  Garrett chases him down, kills the bandit and retrieves the money.  Garrett tells the cavalry all the bank robbers are dead, allowing George to stay on the ranch and help Agnes to re-build. 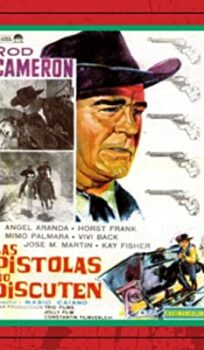