While the rest of the crew prepares for opening night, mob boss Nick (Joe Viterelli) confronts Cheech (Chazz Palminteri) about his suspicions that Cheech killed Nick’s girlfriend Olive (Jennifer Tilly). Though guilty, Cheech brushes the gangsters off and insists he needs to get to the theater to wish the crew good luck. They chase Cheech to the theater, and gun him down behind the scenes while the play is underway. Cheech dies in playwright David Shayne’s (John Cusack) arms, whispering the oft-repeated punchline of the movie, “Don’t Speak.”

Despite receiving wonderful reviews for the play, David Shayne leaves the theater that night to find his ex-girlfriend (Mary Louise Parker), and asks her to marry him and move away from the city immediately. He is done with being an artist. 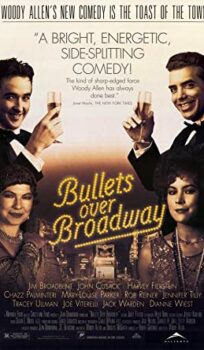