Bunny (Simon Farnaby) steals the matador outfit but looses it to a gypsy. He tells Stephen (Edward Hogg) that they have to flee the town and Stephen’s sweetheart Eloisa (Verónica Echegui), whose brother owns the suit.

Simon decides to stay with Eloisa and Bunny drunkenly leaves. However, when Stephen returns, Eloisa punches him and throws him out. Stephen leaves the town with Bunny, who admits to phoning Eloisa and telling her what happened. Bunny and Stephen get into a fight on the train and Bunny decides they’ll both get off the train, so he can finally fight a bull in a field, as he promised earlier.

Bunny does well and performs like a real matador, with Stephen watching from the side. But as he goes to leave the field, the bull charges and Bunny lets the bull gore him to death. Stephen is devastated and returns home and commences his year of never leaving his house, (which is what we’ve seen earlier in the film) but Bunny still is there as a figment of Stephen’s imagination. He convinces that he should phone Eloisa and see if there’s any chance of them getting together. It must work, as Stephen throws out all his hoarded possessions and leaves the house to return to Spain. 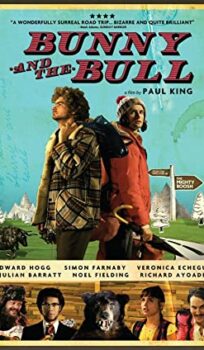