Short version: Thanks Evil Ed
Tess (Cher) saves her club by purchasing the air rights above her property. The money she gets from the sale helps her buy out her ex-husband (Peter Gallagher), pay off the two mortgages and prevents real estate developer Marcus (Eric Dane) from building the high-rise on the site of her Burlesque Club. Ali (Christina Aguilera) winds up with Jack (Cam Gigandet) and keeps singing at the club. Eternally-sloshed diva Nikki (Kristen Bell) is even welcomed back into the club at the end. (And they all lived happily ever after…)

Extended version: Thanks Leah
Ali (Christina Aguilera) leaves small town Iowa for LA. When she arrives she gets a small place to live and starts looking for work, she happens upon the Burlesque club run by Tess (Cher) where she is immediately intrigued and goes to talk to Tess to see if she can get a job as a dancer, which is not available at that time. The club waitress that works there doesn’t do a very good job, so she is replaced by Ali after she starts picking up drinks and helping out the bartender Jack, who is also a composer. One night Ali comes home from work to find out she has been robbed. She calls Jack, and promises to only stay the night at his place and then find a new place, in the morning she is making coffee and sees a picture of him and a girl on the way, which she asks about and he mentions it’s his fiancé working in NYC in the theatre, so she is immediately embarrassed and realizes he is not gay, and shouldn’t probably stay there. Shortly after this his fiancé calls and says she wont be back when they planned and has to stay in NYC longer, so Jack needs a roommate for rent, which Ali then decides to stay. Ali works at the club for a while longer and then when one of the dancers finds out she is pregnant, they hold auditions, which they do not tell Ali about. She walks in and as she knows all the routines already she auditions and is hired. This angers Nikki (Kristen Bell) who has been the star of the show up until now. One night on stage Nikki sabotages the music and Ali has to start singing, which backfires for Nikki and Ali is a hit from then on and the entire show is built around her. This rich guy (Eric Dane) wants to purchase the club from Tess as they are having financial difficulties, however Tess does not want to sell, esp since they now have Ali belting it out every night. Nikki of course gets jealous and throws a few fits. The rich guy (Eric Dane) starts hanging out with Ali, this of course makes Jack jealous. At the pregnant dancer’s wedding Jack has a drunken phone conversation with his fiancé over the phone and they break up. That night Ali and Jack sleep together, and begin a relationship.

Sometime later – The fiancé comes back into town and into the apartment to find Jack and Ali sleeping in the bedroom. She freaks out, Ali leaves and heads to Stanley Tucci’s house, before heading over to the rich guy’s place. Jack looks for her but cannot find her. At the rich guy’s place she realizes he is going to buy the club so he can knock it down and develop real estate so she quickly leaves and goes to see Tess, who then goes to see the condo developer next door (James Brolin) to propose he buy the airspace above the club so the bank won’t take the club and the Rich guy won’t buy it and build office buildings in front of the condo’s million dollar views. At the end of the movie Jack apologizes to Ali  about how he should have never let her leave and they get back together, he writes a song for her to sing, which is the closing number for the movie. 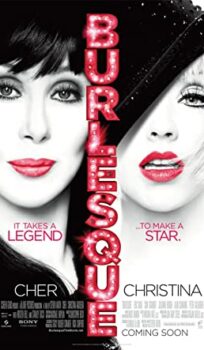