Ben and Marian Rolf rent a huge beautiful house for the summer from an elderly brother and sister. They are surprised it is so cheap.  The catch is that the ancient mother of their landlords will remain in her room in the attic.  Allegedly, she is a recluse who never leaves her room, and just need food brought to her.  They come to spend 3 months, with their son Davey, and Ben’s Aunt Elizabeth.  The landlords have an unsettling obsession with the fact that there will be a child in the house.

Marion soon begins to act strangely. She becomes obsessed with the upkeep and maintenance of the house.  Marion spends long periods of time in the attic with the old lady, and never lets anyone else go up or see the old lady.  Marion and Elizabeth both look older and older over a short period of time.

Stranger things begin to happen.  Ben tries to drown Davey, in the pool, and afterwards can not understand why he did it.  The gas in Davey’s room is left on, and he is barely saved in time.  Elizabeth becomes disoriented and frightened, and then dies suddenly.  Marion is obsessed that they must not leave the house.  When Ben tries to escape with Davey, trees fall blocking their car.       Davey is in the pool alone, when the water seems to come alive, trying to drown him.  Marion is able to pull him out.  This event seems to break the spell the house has on Marion, and she agrees that they must leave.  However, when they are in the car ready to go, she suddenly runs back in saying she must let the old lady in the attic know they are leaving.

Ben tires of waiting in the car, and goes to find her.  He sees the old lady sitting at the end of the attic with her back to him.  He asks where Marion is, but gets no answer.  He finally goes to her, and turns her chair around.  It is Marion who has suddenly aged greatly.  Marion throws Ben out the attic window, where he falls to his death right in front of Davey.  Hysterical, Davey begins running and bricks from the top of the chimney fall on Davey, killing him.

The brother and sister landlord return, stating that their mother has come back to them, implying that Marion has now turned into “their mother”. 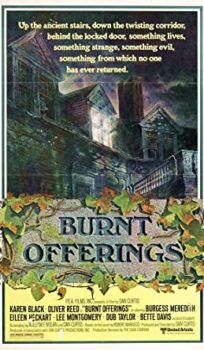