Bo Decker is a cowboy who has never left the ranch he grew up on, until now, when he takes the bus to the city to compete in the rodeo. He is a loud obnoxious irritating bully, with no manners. He meets Cherie (Marilyn Monroe) and decides he will marry her. She despises him. She tries to escape on a bus to LA. Bo ropes her like a steer and drags her onto the bus to his ranch in Montana.

Heavy snow closes the road, forcing an overnight stay at a remote bus stop.  Everyone else sees that Bo is abducting her. The bus driver (a former state wrestling champion) gives Bo the beating Bo deserves. In the morning, when the road opens, Cherie inexplicably suddenly decides that she wants to marry Bo and live on his ranch. She boards the bus with him. 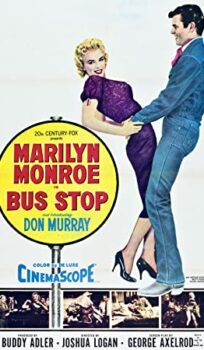