The kids figure out who Max (Daniel Stern) really is and sedate him. Agent Palmer (Jon Polito) and Scout Leader Erickson (Brad Sullivan) see the kids calling to them to come get Max, and they go after them, but only Palmer appears to take Max away, puzzling the kids. Palmer brings Max before Bragden (Anthony Heald), who is alive and well, and it is revealed that Palmer – who tied up Erickson to a tree – is in on Bragden’s scheme. Bragden had Max framed simply because he was a pathetic loser. The kids, seeing that Max is innocent, save him by accidentally knocking him into a nearby river, and all except Dana (Michael Galeota) – who went his own way – jump into the river after him. They and Max are both saved from going over a waterfall by Dana, and they all make Bragden & Palmer believe that they died by casting their packs into the river.

Mrs. Patterson (Ann Dowd) accidentally discovers Max’s note about Bragden’s home on Devil’s Peak, so she goes up there only to get tied up by Bragden. Max and the kids arrive there some time later, and are soon spotted by Palmer. Erickson – having earlier escaped his bounds – arrives and incapacitates Palmer. When Max tries to save Mrs. Patterson, Bragden stops him, and takes them out onto the deck to shoot them. Gordy (Blake Bashoff) sees this and charges at Bragden, but ends up going over the deck’s railing and down the cliff, getting stuck on a tree branch. Max knocks out Bragden and then saves Gordy. Bragden’s scheme is foiled, and Max’s innocence is proven to all.

Erickson makes the kids 1st Class Eagle Scouts, and Max gets Scout Leader honors. Erickson then tells him that he will be going on an overnight to Yosemite – not only with his kids, but a big group of other kids, too. The other kids swarm him as the movie ends. 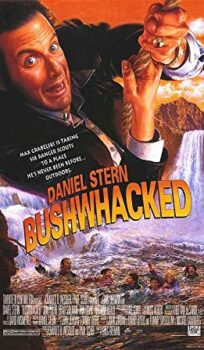