Short version:
Jenna, (Sam’s sister), is the serial killer. She was in love with her brother and wanted him to herself.

Longer version:
Sam is able to travel back in time to witness the past, if he changes anything about the past it alters the future.

When he was a child he traveled back in time to save his sister Jenna from a house fire, but as a result of saving her from a fire she was supposed to die in, his parents burned to death instead. He and his sister are now very close and she assists him with his travels into the past to solve unsolved murders.

As a favor to an old friend, he goes back in time to witness his first girlfriends murder but something is altered and now he is a suspect in the murder as well as a series of other murders.

After several jumps, altered futures and more murders, we discover that his sister can also jump into the past and has been killing the women that her brother Sam would have had a future with because she is in love with him. Sickened by what his sister has done, he travels into the past one more time and saves his parents from the fire and letting his siter die. When he travels back to the future he has a wife (one of the women his sister had killed), they have a young daughter they named Jenna after his sister.

The family shows up at a BBQ at his now living parents house. Jenna takes her doll and places it on the BBQ grill and watches it burn with a smile on her face implying she as crazy as her aunt was. 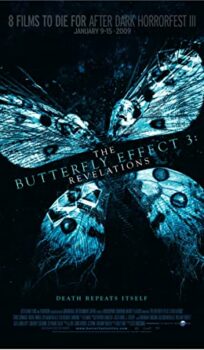