The Cabrini-Green housing projects has become gentrified in recent decades. Artist Anthony McCoy (Yahya Abdul-Mateen II) and his girlfriend Brianna Cartwright (Teyonah Parris) move into a new apartment there, and Anthony meets a man named William Burke(Colman Domingo), who tells him the legend of Candyman, a figure who takes the form of victims of racial injustice. The first form of Candyman was Daniel Robitaille (Tony Todd), a black man who fell for a white woman and was murdered by her father. For Burke, it was a man named Sherman Fields who gave kids candy and was killed when he was accused of putting razor blades in candy. The legend states that one must look in the mirror and say Candyman’s name five times before he claims his victims.

Anthony uses the legend as a display in an art gallery to challenge people to summon Candyman. Among Candyman’s victims are art dealer Clive and his girlfriend Jerrica, art critic Finley Stephens, and a group of prep school girls. Meanwhile, Anthony’s mind and body begin to deteriorate after he is stung by a bee and he becomes obsessed with the Candyman’s history. This drives a wedge between him and Brianna.

Just as the two are about to reconcile, they are captured by Burke, who wants to use Candyman as retribution against racial oppressors. He cuts off Anthony’s hand and places a hook there, as is traditionally Candyman’s appearance. Brianna escapes and kills Burke, but the police arrive and kill Anthony. When the cops turn out to be dirty and plan to manipulate Brianna’s words to convict her and Anthony, she summons Candyman, who now takes Anthony’s form, to kill the dirty cops. Before leaving, Candyman takes the form of Daniel Robitaille and tells Brianna to inform everyone of the truth. 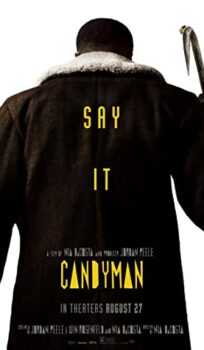