Pooper:
Gloria is the only survivor of the ordeal with the cannibals. When she returns to the US, she publishes her doctoral thesis in which she lies about what she experienced in the Amazon and falsely states there are no cannibals living therein.

Long Ending:
This film was made during the cannibal craze in the ’80s kicked off by Cannibal Holocaust. Like many of the cannibal films of this era, this movie featured actual killings of animals. It was also shot largely in the Amazon. The film was initially banned by over 30 countries.

In New York City, the police are investigating the disappearance of a drug-dealer named Mike Logan (Giovanni Lombardo Radice) after a junkie is murdered by two mafia members in his home. The police eventually locate Mike’s girlfriend, Myrna, who eventually reveals that Mike is in Latin America. She then flies down to find Mike.

In Paraguay, we are introduced to Gloria Davis (Lorraine De Selle), her brother and research assistant Rudy (Danilo Mattei) and her friend Pat Johnson (Zora Kerova). Gloria is writing a doctoral thesis in which she sets out to disprove the existence of cannibalistic tribes living in the Amazon. The trio set off into the jungle to make contact with native tribes and prove Gloria’s thesis.

In the jungle, they find Mike and his wounded friend Joe (Walter Lucchini) fleeing for their lives. Mike claims that they have just escaped from a village of cannibalistic tribesman. Mike states that he and Joe were panning for emeralds with a Portuguese man when they were attacked by cannibals. They state that the Portuguese man was tortured, castrated, eaten, and burned on a stake and that Joe was injured in their escape. Gloria is crestfallen to hear of such brutality and they agree to help Mike and Joe. That night, Mike gives Pat some cocaine and the two have sex.

The next morning, Gloria is missing (she is eventually found  to have fallen into a pit built by the natives to catch animals while going to the river to bathe and is recovered). While  searching for Gloria, the group finds the village that Mike and Joe had escaped from (as well as a burned and mutilated corpse they assume to be the Portuguese man). The only people in the village are the elderly, women and the very young. None of them threaten the travelers and in fact, they seem scared of them. Joe passes out due to his injuries and despite Mike’s warnings, the group decides to stay in the village with Joe until he either dies or recovers. While there, Mike (prodded by Pat) needlessly murders a young native girl (causing Rudy to kick his ass).

In a feverish state, Joe admits to Gloria and Rudy that Mike’s story was a lie. They had met one of the tribesmen in town and the tribesman revealed that there were emeralds in the river near the village they are in. Upon arrival, Joe and Mike learn all the men are on a hunting excursion and the pair planned to simply rob the village of all the emeralds. Likely due to his cocaine habit, Mike tortured, castrated, killed and immolated the tribesman (and that is the actual corpse they found). Joe passes away soon after and Rudy hypothesizes that when the men return, their group will be made to pay. Rudy and Gloria go to gather their things, only to learn that Mike and Pat have stolen all their supplies and money and have already fled the village.

The village men return, having captured Mike and Pat. They find Joe’s corpse and immediately begin eating it (thus demonstrating Gloria was wrong about the non-existence of cannibals). The tribesmen eventually catch Rudy and Gloria and, as Rudy predicted, begin torturing all of them. Rudy and Gloria agree that they are only being tortured because of the abuse the tribe suffered at Mike’s hands (and the hands of other exploitative westerners). Mike gets the worst of it, being castrated and having his arm chopped off. Eventually, the cannibals kill all of the group except for Gloria. Meanwhile, Myrna hires a guide to help her look for Mike but they never find him. A tribesman lies to Myrna and says Mike and his friends were killed in a canoeing accident.

One native helps Gloria escape (although he is killed in the escape when he accidentally runs into a hunting trap). Gloria seems suicidal, but remembers some encouraging words Rudy told her before he was killed and continues to flee. Eventually, she is found near-death by some poachers and is rescued.

The film ends with Gloria back in New York and receiving her doctorate from her university. At the ceremony, we learn that Gloria has lied about her encounter. She claims the others in her group were killed in a canoeing incident and also claims that she found no evidence of cannibalism among the natives (likely because she feels that ultimately, Westerners are responsible for driving the natives to madness). Myrna, in attendance at the ceremony, seems skeptical Gloria’s story. 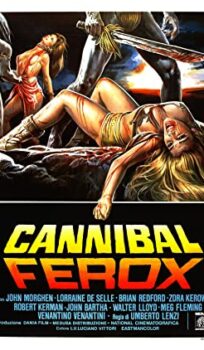