Pooper:
Zain is sent to jail for stabbing Assad. While jailed, he gets fed up with the irresponsibility of his neglectful parents and sues them “for giving him life”. He also denounces Aspro, who is raided and arrested for his human trafficking. In the end, he obtains his much-desired ID card.

Longer version:
After thinking Rahil (Yordanos Shifewau) wouldn’t return, Zain (Zain Al Rafeea) makes the sorrowful decision of turning Yonas (Boluwatife Treasure Bankole) over to charming trafficker Aspro (Alaa Chouchnieh), in return for himself being given papers to become a refugee in Sweden; however, Aspro demands some proof of identification in order to do the process. Zain returns home, where he gets into a bitter confrontation with his parents, Souad (Kawthar Al Haddad) and Selim (Fadi Kamel Youssef), demanding “his papers”, while they, in turn, disown him, throw him out of the house and assert him that “he is nothing, like themselves, because they can never get any papers”. It is here he finds out that his beloved sister Sahar (Cedra Izam) “went to the hospital and is now gone”; he realizes it was Assad’s (Nour El Husseini) fault. Enraged, he grabs a kitchen knife, goes after Assad and stabs him (off-screen; only the commotion of people gathered around is seen).

The bulk of the movie dealt with the aftermath of this incident, going back and forth between earlier events and Zain being jailed and standing trial. It is revealed that Sahar, indeed, became pregnant by Assad -now in a wheelchair from Zain’s attack- and, upon giving birth, was refused medical attention and bled to death. While in prison, Zain spots Rahil, who cries in desperation for Yonas. He, then, decides to denounce Aspro, whose house eventually gets raided and he is arrested, leading to Rahil and Yonas reuniting.

Souad comes to see Zain, announcing she herself is pregnant again; this proves to be the last straw for him. He publicly denounces his parents and all other parents who are abusive and neglectful to their children, it becoming a big media sensation. Another trial ensues, where Zain demands “they stop having children”, because they will never live a life any different than the one he’s had.

The last sequence finds Zain having his photo taken for the ID card he so dearly wanted. Upon his very serious, embittered face, the photographer asks him to smile, “because it is for his ID, not his death certificate”. This prompts him to smile and the film ends with that freeze-frame. 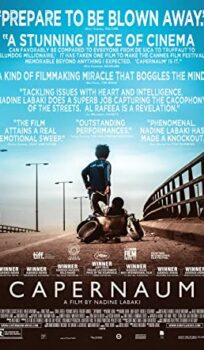