While covering the murder of a family in Kansas in 1959, New York journalist Truman Capote (Phillip Seymour Hoffman) is inspired to write more than just press coverage, and decides to write it into a book, which he entitles “In Cold Blood,” and is accepted with great praise by his publisher and the public, even before it is even completed.

Over the months and years that pass as the convicted murderers await their death sentence to be carried out, Capote gathers information from one of the two murderers, Perry Smith (Clifton Collins, Jr.), on his own background. Capote speaks with Perry’s sister, who labels him (as the book’s title would suggest) a cold blooded murderer.

Just before their execution, Truman gets the last interview with Perry, who tells him what actually happened the night of the murders, and how he and his partner had never intended on killing the family, but only of robbing them of a supposed $10,000. However, when they found that there was no more than $50 in the whole house, Perry snapped and murdered the family of four. Perry is executed by hanging, and (not on screen) so was his partner.

After more than five years of waiting, Capote’s book finally has a concrete ending, and made way for a new kind of literature: non-fiction novels. 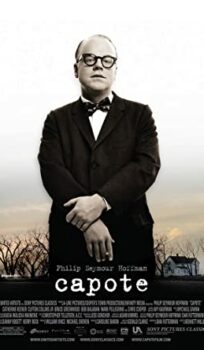