Pooper:
Bucky didn’t bomb the UN summit. Zemo did and framed him to tear the Avengers apart. Stark fights Cap and Bucky when he learns that Bucky killed his parents. Black Panther refuses to let Zemo commit suicide and has him imprisoned. Stark has Cap break out the imprisoned Avengers.

More details:
Bucky didn’t bomb the UN summit in Vienna. He was framed by Helmut Zemo, who intended to use the event as a means to further drive the Avengers apart, as revenge for the deaths of his family in Sokovia. Zemo, masquerading as a psychiatrist that he killed, says a series of words to activate the HYDRA brainwashing that Bucky had undergone. Bucky tells Zemo about the mission in 1991 where he stole five supplements of the super soldier serum before assassinating the transporters.

T’Challa’s father the Wakandan King is killed in the bombing, and he takes on the guise of the Black Panther to avenge his father, siding with Tony Stark. Tony also recruits a young Peter Parker after seeing some of his spider-powered crime-fighting on YouTube.

After an epic battle consisting of Iron Man, War Machine, Black Panther, Black Widow, Vision, and Spider-Man vs. Captain America, Falcon, Bucky, Scarlet Witch, Hawkeye, and Ant-Man, Black Widow allows Captain America and Bucky to take the Quinjet to Siberia, where they believe Zemo has gone to revive the other five Winter Soldiers.

In the battle Vision accidentally shoots out War Machine’s arc reactor, causing his suit to lose power while in flight. The fall leaves Rhodes paralyzed from the waist down.

After helping Rhodes with physical therapy using an exoskeletal structure to help him walk, Stark receives a letter from Captain America with an untraceable cell phone telling him to call him if he needs him. The next scene shows Cap breaking the Avengers out of prison.

Stark visits the prison where Falcon, Ant’Man, Scarlet Witch, and Hawkeye are imprisoned. Silently disgusted by how they are being treated, he reveals to Falcon that he developed the prison and so can control it with his tech. He cuts all feeds so that Falcon can tell him where to find Cap and Bucky. He is followed by Black Panther in a stealth jet.

When Stark arrives at Siberia, he approaches Cap and Bucky in peace to understand why they are there. Zemo shows them how the soldier serums that were stolen were used to create five more Winter Soldiers, but unlike Bucky they could not be controlled, and so were placed in stasis in Siberia.

When Zemo replays the mission video from 1991, it is revealed that the transporters Bucky assassinated were in fact Stark’s parents. Though Cap knew Stark’s parents had been the targets, he never knew Bucky was the one who did it, and is also sympathetic to Bucky’s brainwashing. Iron Man takes on Captain America and The Winter Soldider mano e mano, in the process destroying the five dormant Winter Soldiers, which is what Zemo really wanted. Outside, Zemo is confronted by Black Panther, knowing now that he was the one who bombed the UN summit killing his father. He refuses to let Zemo commit suicide now that he has nothing further to fight for.

Stark receives a letter from Captain America with an untraceable cell phone telling him to call him if he needs him. The next scene shows Cap breaking the Avengers out of prison.

Mid credits: Bucky voluntarily goes back into stasis deep in the Wakandan jungle until his brainwashing can be undone.

And the closing caption states, “Spider-Man will return.” 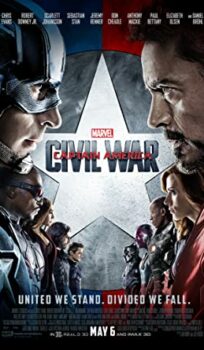