Short Ending
After defeating the Red Skull (Hugo Weaving) and foiling his master plan during World War II, Captain America (Chris Evans) pilots the missile laden jet fighter into the arctic snow. He revives in a room where a Brooklyn Dodgers baseball game is being broadcast over the radio. A SHIELD agent (Amanda Righetti) comes in to talk with him, but Captain realizes that the room he is actually in a prison and breaks out. He discovers that he has been awakened in the 21st century and had been frozen in the arctic tundra for over 70 years. He and Nick Fury (Samuel L. Jackson) go off to talk about what lies ahead for Captain America.

Long Ending
Agents of SHIELD are investigating a jet-fighter wreck discovered in the Arctic. In the wreck, they find a star-spangled shield. We then flash back to the 1940s – World War II is in full swing.

Steve Rodgers (Captain America’s alter ego) is desperate to get into the Army and serve his country. His determination impresses Dr. Abraham Erskine (Stanley Tucci) who signs Steve up to be the first test subject for the “super-soldier” program wherein they hope to make him into a superhuman to defeat the Nazi regime. While in Germany, Dr. Erskine had been employed by Hitler’s protege, the Red Skull, who had taken an earlier version of the serum. Although the Red Skull became stronger and superhuman, the early formula burned away his skin, turned his skull red, and drove him mad with power. The Red Skull runs Hitler’s super-science division named HYDRA and has plans to not only destroy the US, but also Germany, and take over the world. The Red Skull finds an ancient power source called the Cosmic Cube that originated in Asgard (Thor’s home planet) and intends to use the Cube’s power to charge his doomsday devices that Dr. Arnim Zola (Toby Jones) has built for him.

With the help of Howard Stark (Dominic Cooper – playing Tony Stark/Iron Man’s genius father), the “super-soldier” experiment is a huge success, increasing Steve’s size and strength. Shortly after the experiment ends, Dr. Erskine is assassinated by an undercover agent of HYDRA.  The head of the anti-HYDRA division, Col. Chester Phillips (Tommy Lee Jones) has no faith in Steve’s abilities and Steve agrees to help the US government raise war bonds by going on a nationwide tour and filming movies as costume-clad hero Captain America! Despite his power he is nothing more than a super-powered actor.

When he arrives in Europe to perform for Col. Phillips’ squad, he learns that HYDRA has captured almost all of the squad, including his best childhood friend James “Bucky” Barnes (Sebastian Stan). With the encouragement of British secret service agent Peggy Carter (Hayley Atwell), Captain America goes behind enemy lines and rescues all of the survivors. Col. Phillips gains faith in him and allows Captain America to form his own international squad to take down HYDRA bases.  They outfit him with a star-spangled shield made out of the super-metal called Vibranium. He and Peggy develop a romance, but Steve becomes ever-more desperate to defeat the Red Skull when Bucky is killed in a mission after falling off a HYDRA train.

Eventually, they attack the last remaining HYDRA base. The Red Skull manages to escape on the HYDRA doomsday jet-fighter that Dr. Zola built and which he intends to use to bomb the world capitals, starting with Steve’s home NYC. Captain America manages to get on the jet just before it takes off. Captain America dispatches all the henchmen and fights Red Skull. During their fight, the Cosmic Cube is damaged. The Cosmic Cube ends up transporting the Red Skull into an alternate dimension before burning a hole through the jet and falling into the sea. The jet is still loaded with missiles, so Captain America decides to crash it into the Arctic where it can’t hurt anyone, and does so while saying a tearful good-bye to Peggy.

Steve awakens in a room where a Brooklyn Dodgers baseball game is being broadcast over the radio. A SHIELD agent (Amanda Righetti) comes in to talk with him, but Captain realizes that the room he is in is a prison and breaks out. He discovers that he has been awakened in the 21st century and had been frozen in the arctic tundra for over 70 years. He and Nick Fury (Samuel L. Jackson) go off to talk about what lies ahead for Captain America. 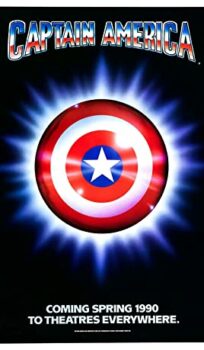