Pooper:
Carol Danvers (Brie Larson) gained her powers when she destroyed the light speed engine, which was powered by the Tesseract (the Space Infinity Stone). The Skrulls have been living on the Imperial Kree Star Cruiser by order of Mar-Vell, a Kree scientist who lived on earth as Dr. Wendy Lawson, Danvers’ mentor. Danvers defeats several Kree mercenaries, but sends Yon-Rogg (Jude Law) back to Hala with the demand that the Kree never return to earth. She leaves to explore the galaxy with the Skrull to find a new homeworld where they can repopulate in peace.

13 years later, she responds to the distress signal sent by Nick Fury (Samuel L. Jackson) at the end of Infinity War. 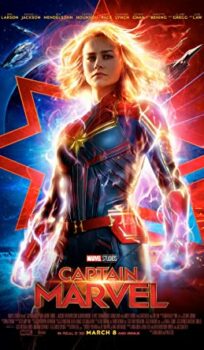