This film is based on the 2009 hijacking at sea of the Maersk Alabama cargo ship.

Captain Rich Phillips (Tom Hanks) manages to convince the four Somali hijackers to leave his ship aboard a lifeboat with $30,000 after his crew is able to capture the hijackers’ leader Muse’ (Barkhad Abdi). But the four forcibly take Phillips onboard the lifeboat with them.

This begins an ordeal with the hijackers attempting to flee to Somalia with their hostage as the U.S. Navy pursues them. The hijackers debate whether to kill Phillips or hold him for ransom; while Phillips attempts to persuade the hijackers to surrender peacefully.

With tensions rising, Muse’ is tricked into boarding the U.S.S. Bainbridge with a promise to negotiate while Phillips is left with the other three hijackers. As the three hijackers realize the hopelessness of their situation, they prepare to execute Phillips, but the three are shot dead by U.S. Navy SEALS aboard the Bainbridge.

We learn in the epilogue that Muse’ was convicted of piracy and sentenced to 33 years in Federal prison and Captain Phillips returned to sea about a year later. 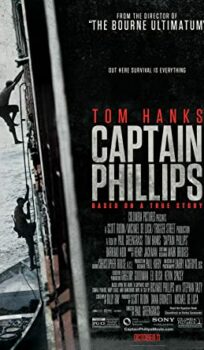