Harvey Cheyne, the son of a mega-wealthy New York tycoon, is a 10 year old spoiled brat who thinks his father’s money can get him anything he wants. Harvey lives at a boarding school, and spends little time with his father. While crossing the Atlantic on an ocean liner, he is equally insufferable with the boys on the ship. Harvey accidentally falls overboard. He is rescued by Manuel (Spencer Tracy) in a fishing boat. Manuel is a crew member on the fishing vessel We’re Here, out of Gloucester. The boat is just heading out to the Grand Banks, and will be out three months.

Harvey tries his usual act with the fishermen. However, they have never heard of his father and do not believe his stories. He wants to be taken immediately back to New York, but they inform him that he will have to sail with them for 3 months until they return. Furthermore, he will have to work to earn his food. Harvey starts off complaining and useless.

Soon he comes to admire Manuel, and wants to earn Manuel’s respect. Manuel becomes like a father to Harvey, teaching him to fish, and to be a man. When they have filled their holds, and are headed back, Harvey reveals that he does not want to go home. He wants to stay onboard as a fisherman. In their race to reach port first, a mast snaps, and Manuel is killed. Manuel had no known family, so his few valuables are given to Harvey. From hearing Harvey talk about Manuel, the father realizes how he has failed, and resolves to be a better father.

They head back to NY with Manuel’s fishing dory in tow. 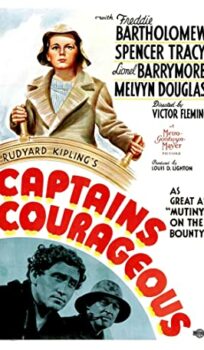