SHORT VERSION:
Everything comes to a head at Coney Island: Toody and Muldoon recover the missing Hortz there, and soon after, all three men find themselves running around Coney Island Park in order to escape Don Motti and his goons when they show up to kill them all. The chase ends at the Tunnel of Love when Motti and his henchmen corner the trio at the ride’s entrance, but before Motti can shoot any of them, he gets knocked inside the ride by one of the exiting swan cars carrying Muldoon’s mother and Officer Schnauser, who had met and fallen in love. While taking his own trip through the Tunnel of Love, Motti becomes extremely overwhelmed by his claustrophobia, so when he gets back outside and is met by a bunch of officers from the 53rd Precinct who tracked Hortz to the park, he willingly surrenders himself to them and vows to confess to all of his wrongdoings.

Toody and Muldoon become full-time partners, and Muldoon eventually marries his new girlfriend Velma, with Toody and his wife Lucille serving as – respectively – the best man and maid of honor. Motti gets brought to trial for his numerous racketeering charges, but he is found not guilty on the basis of insanity; his episode in the Tunnel of Love has caused him to suffer a complete mental breakdown. He is last seen wearing a straitjacket and being interviewed in a padded room in a psychiatric hospital, where all he does is talk a bunch of nonsense.

LONG VERSION:
After a second assassination attempt by Don Motti’s (Daniel Baldwin) henchmen Carlo (Bobby C. Collins) and Nicco (Louis Di Bianco) against Hortz (Jeremy Piven) in his jail cell meets with failure, Captain Anderson (Nipsey Russell) comes to believe that one of his fellow cops in the 53rd Precinct is trying to kill Hortz for Motti, so he brings Hortz into his office and tells him that he has to get him out of here and put him somewhere else. After seeing Toody (David Johansen) walk by his office with Muldoon (John C. McGinley) moments later, Anderson decides to place Hortz in Toody’s custody, thinking that the mafia would not be desperate enough to hire a knucklehead like him to kill ANYONE. He thus gets Toody’s and Muldoon’s attentions after they reach Toody’s car and tells them to open the trunk, and once Toody does so, Hortz hurries out and jumps into it. After Toody closes the lid, Anderson explains to the duo that someone in the precinct is trying to bump off Hortz, and he tells Toody that he wants him to hide Hortz in his house until the department can find a safe place to keep him. However, he warns both him and Muldoon that, if they bungle this up, they will be fired.

However, rather than head straight home, Toody takes Muldoon to the Billy Club Bar for a double date that he had already arranged with his wife Lucille (Rosie O’Donnell), and he introduces Muldoon to his blind date, Velma (Fran Drescher), who – unbeknownst to Muldoon – is a vixen with a sexual attraction to policemen and thus has gotten intimate with most of the officers in their precinct. After the two couples have a nice night out, Muldoon goes somewhere private with Velma and loses his virginity to her while Toody has sex with Lucille back at their house, and by this point, Toody has completely forgotten that Hortz is still in his car. While he sleeps later on, two prostitutes – Arlene (Ellen-Ray Hennessy) and Brandy (Sally Cahill) – and their Madam (Jackie Richardson) are shown walking in front of his house, and the Madam gets a call from a client wanting both of her girls’ services immediately. After Arlene and Brandy point out that they won’t be able to get a taxi out here at this time of night, the Madam takes notice of Toody’s car, which he left unlocked out front, and she and the girls steal it. Toody wakes up the next morning and suddenly remembers that he left Hortz in the trunk, and after he notices that the car is gone, he quickly comes to believe that he has been kidnapped by Motti and goes into a panic. He soon gets a phone call from Anderson, who tells him that the FBI just collared a hitman named Detroit Dan who was flown in by Motti to kill Hortz, and when Anderson then asks him about Hortz’s status, Toody lies to him by saying that he still has him under his protection.

Toody goes to the precinct to find Muldoon, and he finds him in the briefing room just as he tells the other cops in there that he loves Velma and intends to make her his wife. Three officers proceed to crudely enlighten him about Velma’s promiscuity, but Muldoon thinks that they are just slandering her and moves toward them to beat them with his nightstick. Toody quickly grabs Muldoon and pulls him out into the hallway, and he tells him that Motti has kidnapped Hortz and he needs him to tamper with the EDNA (Electronic Display Network Advisor) computer’s signal on Hortz so Anderson won’t find out that he isn’t at his house. He also tells him that he has decided to go undercover as Detroit Dan and meet with Motti in the hope of finding Hortz (since Detroit Dan’s appearance is not widely known). Shortly after Toody leaves, Muldoon goes into Anderson’s office and makes the necessary alterations to EDNA, after which he is surprised by Velma, who came to the station to see him. Muldoon tells her about how he was ridiculed by his fellow officers after he professed his love for her, and these words pleasantly surprise her and spur her to confess to him that she has indeed chased after many cops before they met and that she has a tendency to equate love with sex. However, she also tells him that she finally understood what real love was when she met him, and the two affirm their new relationship.

Toody goes to Motti’s hangout, the Standard Social Club, and has his meeting with Motti. Muldoon is shown driving in a police cruiser with Velma, and after he sees on his mobile data terminal that Hortz’s frequency has him locked in at Coney Island, he tells Velma that he has to go save him, and she replies that she is coming with him because she just got him back and she isn’t letting him go now. Meanwhile, the Madam, Arlene, and Brandy find Hortz in the trunk, and after Arlene points out that he is the Motti mob witness from the news, the Madam sends the girls off with him to have a good time around Coney Island Park, then she calls up Motti and tells him that she has Hortz. Motti tells Toody to go to Coney Island and waste him, so Toody heads out the door with Carlo and Nicco accompanying him. However, once they step outside, Lucille shows up wanting to speak to her husband, having been driven there by Mr. Kim (Von Flores), a friend of Toody’s who brought him to the club earlier on in his limousine. Rather than blow his cover, Toody tells the club’s doormen to get rid of her, so they pick her up and throw her into a nearby dumpster. Lucille calls Anderson on her cell phone and tells him about what Toody and the doormen just did to her, and when he asks who is watching Hortz, she replies that her husband and Muldoon lost him sometime last night. Motti then finds out that Toody is a policeman when the police reality show Boys in Blue interrupts his TV program to air a commercial promoting tonight’s episode that is featuring Toody, so he orders one of his men to get his car, intending to drive over to Coney Island and eliminate both Toody and Hortz.

Muldoon and Velma track down Hortz to the Hotel Winchester, and they bust into his room to find him watching TV with Arlene and Brandy. Toody arrives outside the hotel moments later (having somehow figured out that Hortz was here), and after sending Carlo and Nicco off to see a peep show, he walks up to Hortz’s room and meets Muldoon and the others. Velma then looks out the window and spots Motti making his arrival, and after informing Toody and Muldoon about it, Toody yells out to him that he is bringing Hortz down. He and Muldoon then bring Hortz downstairs and have him look like he has been shot and killed, and they meet Motti, Carlo, and Nicco in the lobby. Toody tries to dupe Motti into thinking that Muldoon is an associate of his pretending to be a cop who has just killed Hortz “in the line of duty”, and after Muldoon says that emergency backup units are on their way here right now, Toody tells Motti and his men that they all need to clear the premises so the police can do their work. Motti doesn’t buy any of this and orders his goons to shoot them all, but just then, the crew of Boys in Blue enters to get all of this on camera, enabling Toody, Muldoon, and Hortz to run away and lead the villains on a chase around the park.

Back at the 53rd Precinct, the EDNA computer informs Anderson that Hortz has escaped, so he tries to call all of the patrol cars to let them know, but his phone doesn’t work. Thankfully, Velma calls the precinct and gets patched through to Anderson and gives him the scoop on what is going on down at Coney Island, so Anderson and a bunch of officers hurry on over to the park. Motti and his men end up cornering Toody, Muldoon, and Hortz at the entrance to the Tunnel of Love, but before Motti can blow them all away, he gets knocked inside the ride by an exiting swan car carrying Officer Schnauser (Al Lewis) and Muldoon’s mother (Barbara Hamilton), who had met off-screen and developed a romantic connection. As Motti takes his own trip through the Tunnel of Love, he gets extremely overwhelmed by his claustrophobia, and when he gets out, he willingly lets himself be arrested by the cops shortly after they show up and promises to confess to all of his wrongdoings.

Carlo and Nicco run away (but are caught during the credits), Velma runs up to and kisses Muldoon, and Hortz takes off back to the Winchester with Arlene and Brandy to continue having fun with them, but not before thanking Toody and Muldoon for showing him an exciting time. Toody acknowledges Muldoon as his partner, and with some encouragement from Toody, Muldoon decides to take a ride in the Tunnel of Love with Velma. Just then, Lucille shows up, and she spots Toody and angrily calls out to him. Fearing her wrath over what happened earlier, he jumps into Muldoon’s and Velma’s swan car and goes inside to avoid her.

As the credits roll, we see that Muldoon and Velma eventually became husband and wife, with Toody and Lucille serving as – respectively – the best man and maid of honor. Motti was brought to trial for his many racketeering charges, but he was found not guilty. However, it turns out that he was found not guilty on the basis of insanity; his episode in the Tunnel of Love has caused him to suffer a complete mental breakdown. He is last seen in a psychiatric hospital wearing a straitjacket and sitting in a padded room, and he is also giving an interview to the Boys in Blue crew, but all he does is talk nonsensically. 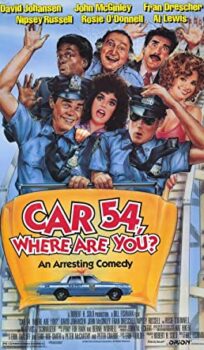