It begins as a simple discussion between Penelope and Michael Longstreet (Jodie Foster and John C. Reily) and Alan and Nancy Cowan (Christoph Waltz and Kate Kinslet) about how to resolve an incident, where Alan and Nancy’s son hit Penelope and Michael’s with a stick. It devolves into a full-fledged, Scotch-fueled, arguement, where each individual drops their polite facade and reveals who they truly are.

In the end, neither party comes to a resolution to their problem and they are only silenced when Alan’s phone, which was thought to be broken after Nancy dropped it in a vase, starts ringing on the table. 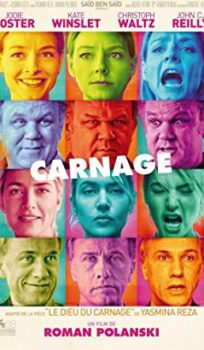