Rance (Scott Valentine) and Dr. Hodges (Janet Gunn) – the sole survivors – kill the two Velociraptors by shooting them many times in the neck, and Rance kills the Tyrannosaurus by throwing a C-4 explosive charge down its throat and detonating it, blowing up its head.

However, a problem arises: Earlier on, Rance, Hodges, and the last of the Marines put some other C-4 charges on the ship’s fuel tanks, intending to blow up the ship and take the dinosaurs and their eggs with it. When Rance detonated the charge used to kill the Tyrannosaurus, it caused the timers on all of the other charges to activate, so he and Hodges had a maximum of 30 seconds to get off of the boat before it blew up. They manage to jump into the safety of the ocean just as the last of the C-4 explodes and destroys the ship.

Then, the movie cuts to the sole surviving terrorist from earlier in the film, still handcuffed and gagged in the police car. A Velociraptor that was missed makes a surprise attack on him, and he screams as the movie ends. 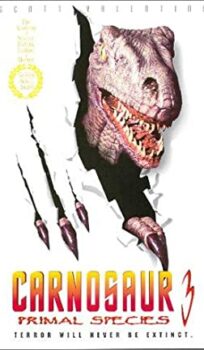