Newly assigned to 00 status, James Bond (Daniel Craig) beats Le Chiffre at the high-stakes poker match, thus robbing him of the funds he needs to pay back the terrorists whose money he has lost.  This was done so that Le Chiffre would be forced to accept immunity and help from MI-6 in exchange for his information.  Le Chiffre has Vesper Lynn (Eva Green) kidnapped and then captures Bond too, torturing him.  Bond’s life is unexpectedly spared when one of Le Chiffre’s clients comes and kills him, leaving Bond alive.

Bond decides to retire while he still has a soul and as he and Vesper are in love, he resigns and decides to leave with her.  Only it turns out that she was being blackmailed from the start (boyfriend being held captive) and she steals the money from the poker match.  James follows her and during the ensuing gun battle with the men she gives the money to, she lets herself drown.  M informs a bitter James that Vesper must have made a deal with the men who left him alive to give them all the money in exchange for his life.  James tracks down the man who was blackmailing her and after shooting him but leaving him alive for the moment, he introduces himself as “Bond, James Bond” for the first time. 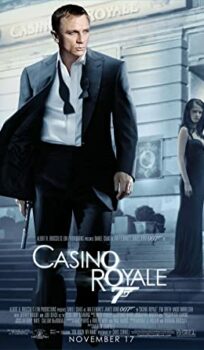