An elderly lady takes food to a chained disfigured creature in an old castle.  She proceeds to whip him mercilessly.  After she leaves, she falls and dies.

John Reilly (Jeffrey Combs) inherits a castle in Italy, and goes to live there with his wife, Susan and blind daughter.  The creatures lives hidden in the basement of the castle.  The creature breaks loose from his chains, and kills various people.  The police suspect that John is the murderer.  John discovers that the creature is his half-brother.  When the father abandoned them and moved to America, the mother chained up the brother and tortured him as revenge on the father.

The creature chases the wife and daughter through the castle, and has them trapped on the roof.  John battles the creature.  They fall from the roof, and both John and the freak die. 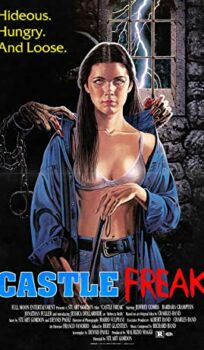