Short version:
Cat Ballou (Jane Fonda) gets revenge on the man responsible for killing her father and is saved from hanging by her friends before they all ride off into the sunset.

Longer version:
The movie opens with two singers telling the story of Cat Ballou (Jane Fonda), an outlaw who is waiting to be hanged in the prison. The story then flashes back to tell the story of how she got there, with musical interludes from the two singers along the way.

Catherine “Cat” Ballou returns home from boarding school to be a schoolteacher but finds that her father has run afoul of the town because a developer wants his water rights and he won’t give them up. She enlists the help of Clay Boone (Michael Callan) and Jed (Dwayne Hickman), two small-time crooks she met on the train, to protect her father. Realizing that they are up against a noseless gunslinger named Tim Strawn (Lee Marvin), they hire the legendary Kid Shelleen (also Lee Marvin) to come out and help.

Shelleen turns out to be a total drunk and Cat’s father is killed by Strawn while Shelleen is sleeping. The town covers for Strawn, leaving Cat determined to get revenge on her own. She and her gang rob a train to get the payroll of the developer who wanted her father’s water rights, but are cast out of their hiding place when it is revealed that kickbacks from the developer are keeping it open. The others try to talk Cat down but she is determined to continue with her revenge even if she has to do it alone.

Inspired by Cat’s dedication, Shelleen cleans himself up, tracks down Strawn, and kills him. He subsequently reveals that Strawn was his brother. Cat goes off to face the owner of the development company by posing as a prostitute. In the ensuing struggle the man is killed and Cat is brought in for execution.

As the noose is placed around Cat’s neck a priest is brought up to deliver last rites. Cat recognizes Jed, who is wearing the same priest costume he wore when she first met him on the train. Jed cuts the rope just as the trapdoor opens and Cat falls into the arms of Clay, who rides off with her. They all escape with the cover of Kid Shelleen, who is drunk again. 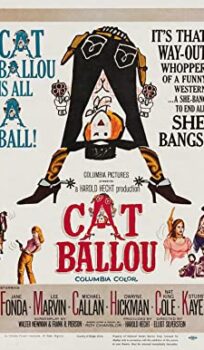