Maggie (Elizabeth Taylor) did not cheat on husband Brick (Paul Newman) with his late best friend Skipper, as Brick claims. Brick blames himself for Skipper’s death because he “let him down” by hanging up on his desperate phone call, after which Skipper committed suicide. Brick tells his father Big Daddy (Burl Ives) the truth about his terminal cancer, while Brick’s brother and sister-in-law conspire to obtain Big Daddy’s inheritance for themselves. To both comfort Big Daddy and win his favour for Brick, Maggie lies to the family and says that she is pregnant with Brick’s child. Big Daddy pretends to believe her and names Brick as his heir. In private she thanks Brick for not revealing her lie, and Brick replies that they’re through with lies and begins to make love to her. The viewer is left with the impression that the pair are reconciled and will have children, making Maggie’s lie the truth.

(In the Tennessee Williams’ play upon which the film is based, it was strongly implied that Brick and Skipper had a homosexual relationship.) 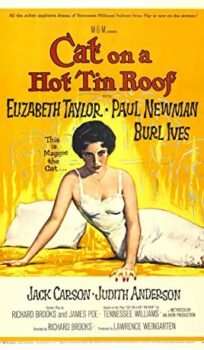