Shannyn Sossamon plays Victoria an uptight panic ridden 20 something who gets a postcards from her sister who is in Paris going to grad school. The postcard reads “Come to Paris, It’ll set you free”.

She flies to Paris and her sister is a true free spirit, and insists that Victoria go to a party that night although she hasn’t slept in 2 days and just wants to rest. The party is held in the Paris underground. It’s explained that 200 years ago they ran out of places to bury the dead in Paris so the city moved 7 million dead bodies from their grave to a lime mine which became 300 hundred miles worth of underground maze where the walls seem to be made of skulls.

The sister’s friends all seem to be into death and love to scare people so they host raves in different areas of the tunnels so the cops won’t know where they are. Upon entering everyone is given a flash light and they basically go to the party. The party is packed and because the walls are made of bones and skulls noise doesn’t travel. Victoria who doesn’t drink alcohol or speak french struggles to get water at the bar, when the party host tells her she doesn’t have to drink there.

Victoria, her sister and her sister’s friends all go to a private room and the host tells a story about the cult of the black virgin. The cult was started by people who went into the catacombs, painted the statues of the virgin Mary black, worshiped the devil and through incest strives the give birth to the anti-Christ. They gave birth to a boy, feed him nothing but raw meat, kept him chained to the wall wearing a the skull of a goat as a mask. By the time the boy was 18 he was a crazed murderer and in essence the anti-Christ they had hoped for. To this day he supposedly lived in the catacombs killing all who crossed his path.

After the story was told and they had convinced Victoria to drink absinthe, the small group of about 8 people moved to an underground pond of water, Victoria was the only one who refused to skinny dip and everyone picked on her so she left them behind to try to find her way back to the party. She gets lost in the underground maze and her sister comes looking for her. As they are trying to find their way back to the party, the goat masked killer slita Victoria’s’ sisters’ throat.

Victoria spends the next 12 hours running through the tunnels trying to escape, being chased. She finds a pick axe and decides to make a stand hitting the thing chasing her. Moments later her sister walks in with her friends. Her sister had faked her death thinking that a near death experience would loosen Victoria up, the friends are all laughing and explaining that they are the black virgin cult and that they bring people to the catacombs to scare them and it was them who were wearing the mask. They realize that the party host isn’t with them and they start looking around while Victoria sits on the ground, too stunned to speak, and that’s when they see the host dead on the ground. Victoria thinks in the dark that it was the goat mask guy stabbed him through the eye with her pick axe. Victoria’s sister starts screaming at her telling her she hates her and wishes her suicide attempts would have worked and says that the party hosts death is all Victoria’s fault.

Victoria stands up, and kills her sister and all of her friends.

She then finds her way out of the catacombs, covered in blood, she gets in a cab and asks to be taken to the airport. 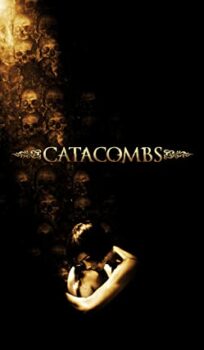