Pooper:
Old Deuteronomy selects Grizabella to be reborn into a new life. She also declares Victoria to be a Jellicle cat. Macavity is stripped of his magical powers.

The movie opens with a woman throwing a bag with a cat inside it into a dumpster. The cat, Victoria (Francesca Hayward), is rescued by a bunch of cats named “Jellicles.” The Jellicle cats worship the moon. Every so often, a Jellicle cat is selected by the ancient, multi-time reborn cat named Old Deuteronomy (Judi Dench) to be given a new life. The Jellicles, led by a cat named Munkustrap (Robbie Fairchild), invite Victoria to attend the ceremony that night. The Jellicles introduce Victoria to the various contenders for the honor of being reborn. They include:

As they meet these cats, Victoria grows close with a cat magician named Mr. Mistoffelees (Laurie Davidson), who performs card tricks and illusions. They are also pursued by a demonic cat named Macavity (Idris Elba) who will do anything to be selected as the cat who gets a new life. Macavity manages to capture all of the contenders except for Rum Tum Teezer as well as Rumpleteazer and Mungojerrie (the latter two join him thinking he is just a fellow prankster, but later regret their aid). The captured cats are held hostage on a boat by Macavity’s henchman Growltiger (Ray Winstone).

The cats prepare for the selection ceremony when Old Deuteronomy arrives. Victoria’s acts of kindness and empathy impress Old Deuteronomy. Victoria is the only cat that is kind to the exiled Grizabella (Jennifer Hudson), who was shunned after she abandoned the Jellicles to join Macavity (who also abandoned her). During a conversation, Victoria learns that Grizabella rues her mistakes and is sustained only by her memories of a better life. Victoria meanwhile confides in Grizabella that all she hoped for was to belong somewhere in life.

As the ceremony begins, Macavity busts in and demands to be selected. Old Deuteronomy says that a cat is chosen based on the purity of their soul and, therefore, he can never be chosen for rebirth as he has an evil soul. With the help of another henchwoman named Bombalurina (Taylor Swift), Macavity drugs the Jellicles and abducts Old Deuteronomy to his boat.

It appears the Jellicles have lost everything, but Victoria leads the Jellicles in encouraging Mr. Mistofelees to tap into real magical powers to rescue Old Deuteronomy. Meanwhile, the cats captured by Macavity break free and subdue all of his helpers as Macavity himself flees.

The time to choose a cat to be reborn arrives and Victoria escorts Grizabella to the ceremony where she tells them of her sadness, regrets and dreams. Touched, the Jellicles once again accept Grizabella and she is selected for a new life. As she begins rising into the sky in a balloon, Macavity leaps onto a rope attached thereto and tries to ascend with his former protégé. He is unable to maintain his grip and falls to a high rooftop where it appears that he has been stripped of his magical powers.

As the Jellicles gather outside to watch Grizabella ascend, Victoria and Mister Mistofelees embrace. Old Deuteronomy breaks the fourth wall and monologues to the movie viewers about things they should know about cats. She then declares that Victoria is a Jellicle and that she finally gets to have the family and love she always hoped for. 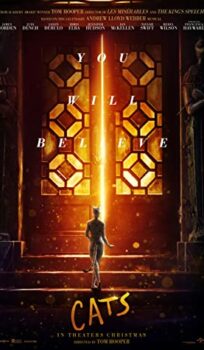