Tim Lippe (Ed Helms) is an insurance agent in the small town of Brown Valley, Wisconsin. He has lived a very sheltered life and never really pursued any goals or dreams. When his agency’s star salesman dies suddenly, Tim is chosen to take his place at an industry convention and give an important presentation which could secure the business its fourth consecutive “2 Diamond” award.

Tim endures a string of misunderstandings and missteps which appear to have erased his chances of winning the annual award. In a desperate bid to accomplish his goal, Tim bribes ASMI President Oren Helgesson (Kurtwood Smith) with $1500 in Traveler’s Checks in order to insure that his company gets the “2 Diamond” award. Heartbroken over selling-out his values, Tim goes on a partying spree with Bree the prostitute in order to ease his pain. Dean (John C Reilly), Ron (Isiah Whitlock Jr) and Joan (Anne Heche) rescue Tim from an out of control party and take him back to the hotel. Tim’s boss, Bill Krogstad (Stephen Root), later comes to his room to say that the award helped him seal a deal to sell off the insurance agency to Mike Pyle (Mike O’Malley). Tim will be given a job in the new firm’s Milwaukee office but the rest of Tim’s co-workers will lose their jobs when their office is closed. Tim is devastated by the news and turns to his friends for help deciding what to do next.

On the final day of the convention, Oren presents the “2 Diamond” award to Krogstad. Tim interrupts the ceremony and stuns the crowd with his admission of what he did in order to get the award. He admits he is ashamed of his actions and says that he hopes he will better exemplify his industry’s standards when he returns to Cedar Rapids for next year’s convention. As Tim is leaving the hall, Pyle confronts Krogstad and tells him that since his purchase offer hinged on Krogstad’s company winning another “2 Diamond” award, the deal is now off. An angry Krogstad rushes after Tim and tells him that he longer has a job at Krogstad’s agency. Tim replies that he has plans to start his own agency. With the help of Dean, Ron and Joan, Tim has already convinced 17 of his clients from Krogstad’s agency to cancel their current policies and sign with his new company.

While saying goodbye in the hotel lobby, Dean, Ron and Tim make plans to get together for a summer vacation. Tim then apologizes to Joan for the way he acted when he was desperate to win the award. On his way home, Tim shocks a flight attendant with tales of what happened to him during the weekend. He then looks out the aircraft window and smiles lovingly as the plane flies over his hometown of Brown Valley. 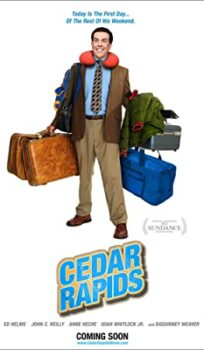