Francesco Dellamorte (Rupert Everett) owns a cemetery in the small town of Buffalora where those who are buried return exactly 7 days later as zombies. It is Francesco’s job, with the aid of his retarted helper Gnaghi (François Hadji-Lazaro), to dispatch of these zombies who crawl out of their graves on a regular basis.

Francesco falls in love with a widow (Anna Falchi), and accidently murders her. He begins to question his sanity after she returns to him multiple times under different personas throughout the film. Fearing his madness and his inability to accept the life-death scenarios being constantly posed to him, Francesco and Gnaghi get in a car and attempt to drive out of Buffalora, only to arrive at the edge of a cliff, where Francesco proclaims “There is no rest of the world”. The camera then cuts from the Francesco and Gnaghi standing on the cliff to a shot of a snowglobe with 2 people standing in the snow, an image which opened up the movie, leaving the viewer to ponder the nature and reality of the events that happened in the movie. Very weird. 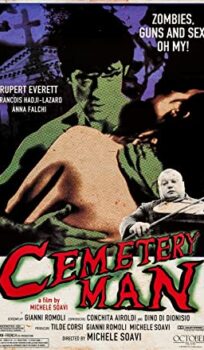