Rancher Ben Caine is pursued by several horsemen.  They catch him outside his home, hang him and force his wife to watch.

They are the Rogers family, rich ranchers who want his land and cattle.  Caine’s brothers go seeking revenge, but return with gold, in payment for the cattle.  The brothers are satisfied by this, and they leave.  His wife, Maria, wants revenge.  She seeks out her old lover, a gunfighter named Manuel.  Manuel tells her he does not believe in revenge, and he will not help her.

In spite of saying this, Manuel goes to the Rogers ranch and is hired to work there.  He secretly sabotages their operation, stampeding horses and killing men.  Maria does not know he is there, and she still wants revenge.  She kidnaps the daughter of old man Rogers. Her plan is to kill the men when they come for the daughter.  Caine’s brothers show up again.  When they learn of the plot, they go back to Rogers.  They reveal Maria’s plan, and return the daughter for more gold.  The Rogers men beat Maria.

Manuel goes to see Maria, and finds her dying.  After she dies, he goes back to confront the Rogers gang.  He faces off alone against all 4 Rogers men in the middle of the street.  He shoots them all dead.  As he is turning to leave, he is shot dead from behind by the daughter. 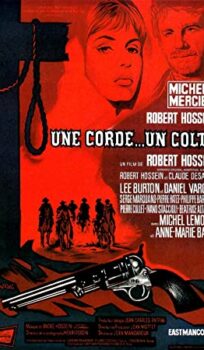