One day, while Edison (Scott “Carrot Top” Thompson) is playing tennis with Bradford (Larry Miller), Bradford tells him that he looked through his Bright Ideas book earlier on and (untruthfully) thinks that he has some brilliant ideas. He then encourages Edison to take some chances and use McMillan Industries’ resources to make his dreams come true. The following day, Edison – along with Larry (Glenn Shadix) from Research & Development (R&D) – comes up with a new invention, the Chef Edison TV Dinner (a TV dinner with a microwave-powered miniature TV built into the container), and when he presents it to the Board of Directors, he excitedly declares that this should go into immediate production. Though his burgeoning romantic interest Natalie (Courtney Thorne-Smith) tells him that there are standard procedures that the company must observe before doing that, such as product testing, focus groups, and safety regulations, Bradford is able to persuade Edison to go right ahead with mass production. The Chef Edison TV Dinner becomes a nationwide hit, which makes McMillan Industries’ stock skyrocket and turns Edison into a very rich man. Edison soon gives his, Ty’s (Mystro Clark), and Zak’s (Jack Plotnick) landlady Mrs. Krubavitch (Estelle Harris) a check to cover a year’s worth of rent on their beach house, and he and Larry co-invent a lie-detecting shirt called a “Bullshirt” that lights up and makes farting sounds whenever the person wearing it tells a lie.

Unfortunately, the influx of success and money quickly goes to Edison’s head, which causes him to start purchasing very costly items for himself and be unnecessarily rude to people. One day, Mrs. Krubavitch storms into the guys’ house while just Ty and Zak are there and informs them that Edison’s check has bounced (thanks to his aforementioned purchases taking the bulk of his income), and she tells them that she wants the rent money by the end of the day in cash or she is evicting them. They head to the McMillan Industries building to speak to Edison about their situation, but they get turned away by his secretary because they don’t have an appointment. This leaves them unable to come up with the money in time, so Mrs. Krubavitch kicks them out, and they end up lodging in a lifeguard shack on the beach.

While Edison is out riding in his limousine with Natalie and she starts to bring up how bad his attitude has gotten lately, a news bulletin suddenly comes on the limo’s TV, and the newscaster announces that Edison’s TV dinners have become the target of a $500 million class action suit. The newscaster then speaks with an Anthony Alosi (Kevin Scannell), who states that, due to consuming a large amount of Edison’s TV dinners, he now glows in the dark, thanks to their built-in TVs emitting a thousand times more radiation than a regular TV. He then has the studio lights turned off to show that he glows. In light of this news, the company’s stock plunges, and at the next board meeting, Bradford rebukes Edison for rushing his product into production without giving it the proper testing and calls him an irresponsible leader. He then nominates himself to replace Edison as chairman, citing how the will left by his late uncle Armand (Jack Warden) stipulated that, if the value of the stock drops below $20 a share, Edison will lose everything and the reins of power will pass to him. Seconds later, the stock goes under $20, and Bradford assumes control of the company and promptly fires Edison. Before having Edison kicked out of the building, he gives him Armand’s surfboard, which he has had chopped to bits. Afterwards, Edison goes to the beach house and finds out about the eviction, so he spends the night on the beach right in front of the lifeguard shack that Ty and Zak are in.

Ty and Zak find Edison the next morning, and Edison declares to them that his inventing days are over before tossing his Bright Ideas book into a garbage can. Meanwhile, Bradford makes preparations to sell McMillan Industries to Globe Incorporated, just like he planned it with its C.E.O., Mrs. Kosik (Raquel Welch), and the merger is scheduled to take place at noon that day. While out on a walk with Ty and Zak, Edison reads a newspaper article announcing the merger and sees a photo of a glowing Anthony Alosi, and he tells his friends that what happened to Alosi makes no sense because he designed the TV dinner himself and he firmly believes that there isn’t enough radiation in that thing to cause someone to glow. When they get back to the lifeguard shack, Edison sees that their surfboards are illuminated in the darkness thanks to being covered in his non-toxic Glo-Gunk, and he is hit with the realization that the glow coming off of the boards is the same color as the glow coming off of Alosi’s skin. He retrieves his idea book from the garbage and notices that the Glo-Gunk formula has been torn out of it, and he then remembers when Bradford told him about how he read his book and saw his idea for Glo-Gunk. He thus draws the conclusion that Bradford must have had some Glo-Gunk made, then paid Alosi to slather the stuff all over his body and pretend that he had radiation poisoning, and these actions were all part of a scheme that Bradford cooked up to gain control of McMillan Industries. Edison tells Ty and Zak that they have to hurry over to the company right now before Bradford can finalize its sale in less than a half-hour.

Meanwhile, at the McMillan Industries building, Larry clears out all of his inventions from R&D and brings them up to Bradford’s office on his orders, having become one of the hundreds of people slated to lose their jobs in the merger. Among the inventions is the Bullshirt, which Bradford’s unaware secretary takes out of the pile and hangs up in Bradford’s office closet. Just as Larry is about to head back to R&D to get his last load of inventions, he accidentally bumps into Bradford and makes him spill his coffee on his shirt. After Bradford kicks Larry out, he goes into his closet to get a new shirt to wear for the meeting, and he unwittingly puts on the Bullshirt. A short time later, Bradford meets with the board and Mrs. Kosik and officially announces the sale of McMillan Industries to Globe Incorporated, but just before Kosik can sign the papers, Edison, Ty, and Zak burst into the boardroom, with Natalie and Larry coming in right behind them after Edison got their attention on the way in. After Bradford calls for security, Edison yells that his TV dinners never harmed anyone, and then he turns off the lights to show that he, Ty, and Zak have Glo-Gunk smeared all over them. Edison explains to the board that they are wearing non-toxic Glo-Gunk and that anyone can claim that they have been exposed to radiation if they put this stuff on, then adds that, if the TV dinners really were releasing as much radiation as Alosi had claimed, he would be charcoal right now. He accuses Bradford of using the TV dinners and the Glo-Gunk as part of a scam to take control of the company, and when Bradford denies it, the Bullshirt activates, and Edison realizes that he has it on and shows it off to the board. He interrogates Bradford further, and through Bradford’s continuous lies, he admits to stealing the Glo-Gunk formula and hiring Alosi to help him with his takeover scheme. Board member Freemont (M. Emmet Walsh) tells Bradford that he is fired, and when Bradford counters that he can’t be fired because he owns 51% of the stock, Natalie informs him that he won’t have that once the Securities and Exchange Commission hears about his hoax. After he asks her what evidence they have to get him convicted of wrongdoing, Kosik proceeds to double-cross him by telling the board that she will testify against him in exchange for a percentage of the gross from the sales of the Bullshirt. Freemont tells Kosik that they have a deal, and after she departs, Freemont orders security to take Bradford away. He runs, and when he sees that his car is totaled (thanks to Edison when he arrived), he attempts to flee in Edison’s car. However, he gets hit in the nuts by Edison’s security system and passes out.

The board reinstates Edison as chairman, but he declines the position, telling them all that he needs to get back to being himself. He then selects Natalie to be the new chairman (which gets a unanimous “yes” vote from the board) before asking her for a full-time job inventing things with Larry in R&D. She agrees to it, and the two of them share a kiss. The movie ends with Edison out surfing while Natalie, Ty, and Zak are watching him, but his fun is brought to an abrupt end when Natalie warns him that he is about to hit some rocks. He activates his board brake to avoid hitting them, but the sudden stop sends him flying through the air, and he crash-lands on the beach and is left dazed. After the others come up to him to check on him, Ms. Krubavitch appears and decides to give him mouth-to-mouth resuscitation, much to his utter horror. 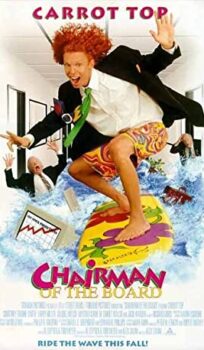