CHAPPiE (Sharlto Copley) figures out how to transfer consciousness. After destroying the Moose, he rushes Deon (Dev Patel) to Tetra Vaal to transfer his consciousness to the prototype Scout droid, and in the process makes short work of Vincent Moore (Hugh Jackman). After reawakening in the scout body, Deon tells CHAPPiE that he can transfer his own consciousness into one of the still functioning Scouts that were deactivated by Moore.

Following that, the Scout program is scrapped and 150,000 reserve human police are dispatched to the streets of Johannesburg. Ninja finds the backup copy CHAPPiE had made of Yolandi’s consciousness, and CHAPPiE works together with Deon to hack into Tetra Vaal’s manufacturing plant to rebuild and reactivate Yolandi as a new and improved Scout with pink coloring and human face. 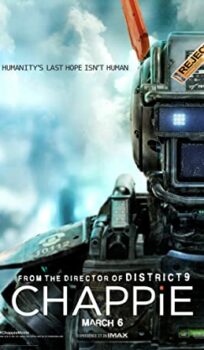