Charley Varrick (Walter Matthau) arranges a meeting with bank executive Boyle (John Vernon) at an old junkyard. Charley flies into the junkyard in his old crop dusting plane. He gets out and gives Boyle a warm greeting, knowing that the evil Mob enforcer “Molly” (Joe Don Baker) is close by and watching. Molly guesses (wrongly) that Boyle must be in cahoots with Charley, and runs Boyle over with his car.

Charley gets back in his plane and tries to take off, but Molly chases the plane with his car, and sideswipes the plane as it’s starting to take off. The plane does a backflip in midair, and lands on its back. Molly approaches the plane, finds that Charley is alive but paralyzed, and demands to know where the money is. Charley tells him the money is in the trunk of one of the cars in the junkyard.

Molly opens the trunk of the car, and sees the body of Sullivan (Andrew Robinson), Charley’s partner, whom Molly had killed earlier. There’s also a bomb in the trunk, and Molly is blown to bits.

Charley climbs out of the plane, unharmed. The airplane flip was actually a stunt that Charley used to perform as a barnstorming pilot years ago, and he had done it deliberately, just to trick Molly into thinking he was out of commission. Charley gets into a car that he had waiting at the junkyard, and drives away with all the Mob money he’d stolen from the bank. 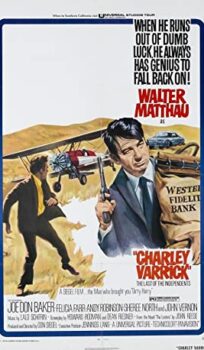