Charlie and the Chocolate Factory(2005)

Charlie Bucket and 4 other children find golden tickets that invite them to a tour of the mysterious Wonka chocolate factory.  Each of the other 4 children is dispatched in the same way as in the original movie.

Willy Wonka (Johnny Depp) tells Charlie that Charlie can have the whole factory as Wonka’s heir, but he must leave his family and never see them again.

In a framing story, we learn that Wonka’s father was a cold distant dentist, who never let Wonka have any chocolate or candy as a child.  Wonka left home as a teen and has never been back.

Charlie refuses to leave his family.

Wonka returns a few weeks later to learn why Charlie is so attached to his family.  Charlie goes with Wonka back to Wonka’s childhood home to see his father.  Wonka takes Charlie as his heir, with the family. 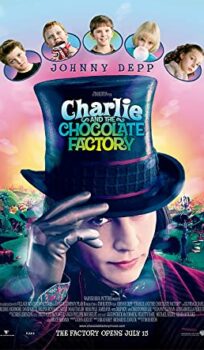