Anna Foster (Mandy Moore) is the teenage daughter of the President of the United States (Mark Harmon). She is given very little freedom or trust by her father. On a trip to Europe, she convinces her dad to let her go out for a night in Prague with the French Prime Minister’s daughter, Gabrielle (Beatrice Rosen) with only two secret service agents – Cynthia (Annabella Sciora) and Alan (Jeremy Piven) – following her. While at a nightclub, Anna discovers that her dad broke his promise and has sent multiple agents to tail her. With Cynthia’s help, Anna escapes from the secret service agents. She hops on to a motor bike driven by a dashing British photographer named Ben (Matthew Goode) and she convinces him to help her escape. Little does she know that Ben is also an agent working for her father.

In order to further get back at her dad, Anna decides to journey to a “Love Parade” in Germany. Ben decides to follow her so he can protect her and inform the President, Cynthia, and Alan of their whereabouts. Unfortunately, the pair are pickpocketed by McGruff (Martin Hancock), a person they befriend on the train. As a result, Ben can no longer report to the President and the others. They continue to journey throughout Europe. Eventually, they fall in love with and become intimate with each other. The pair finally make it to Germany in time for the love parade. While there, Anna overhears Ben talking to the President on a payphone and runs off, upset that he lied to her. While caught in the crowd, she gets assaulted by drunken partygoers who recognize her as the President’s daughter. Ben finds and rescues her from the belligerent crowd, and hands her over to Alan and Cynthia who had just arrived. Anna goes back to the US with her heart broken.

In the future, Alan and Cynthia (now dating each other) are protecting Anna while she is at college. During one of her school breaks, Anna learns that Ben resigned soon after their adventure. She goes to Britain to find him and discovers that he still loves her. They kiss as the credits roll. 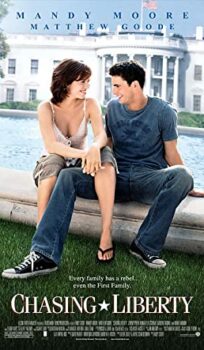