Submitted by Patrick B

Velma Kelly (Catherine Zeta-Jones) is given Roxie’s diary by the prison matron, Mama Morton (Queen Latifah). Velma uses the diary to get her prison sentence reduced in exchange for testifying against Roxie (Renee Zellweger). Billy Flynn (Richard Gere), Roxie’s lawyer, discredits the diary as fake and Roxie is acquitted.

After the trial ends, we find out that Billy himself faked a few entries in the diary so it would be discredited, and slipped it to Mama Morton. Roxie’s estranged husband, Amos (John C. Reilly) hopes for a reconciliation, but Roxie walks away from him. (She’s not pregnant, either.)

Just as Roxie is about to bask in her triumph, another woman shoots her lover–and her lawyer–on the courthouse steps, and the reporters all flock to the new sensation.

Roxie tries to make it in vaudeville, but there’s no interest in her anymore. Only by teaming up with Velma as a double act can they get work. The two of them perform a big triumphant number (complete with machine guns) in front of an appreciative audience. 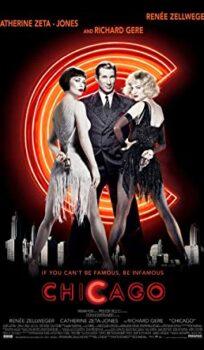