Chucky (voiced by Brad Dourif) kills Joanne (Jenny Agutter) and Phil Simpson (Gerrit Graham) and almost possesses an unconscious Andy (Alex Vincent) in the Play Pals Toy Company factory. Unfortunately for Chucky, though he says the transfer spell without any interruptions, he has said it too late and is therefore stuck in his Good Guy Doll body.

Angry with Andy, he decides to make him pay for this by killing him. Chucky loses his right hand, then the lower half of his body, and is doused with hot plastic before Kyle (Christine Elise) sticks a severed air hose in his mouth, inflating his head and making it explode, killing him again. Andy and Kyle leave for ‘home,” although neither knows where “home” is. 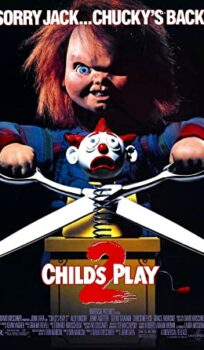