SHORT VERSION
Evelyn (Faye Dunaway) is the girl’s sister and her mother.

LONG VERSION
Jake Gittes (Jack Nicholson) learns that Evelyn (Faye Dunaway) had an incestuous affair with her rich, evil father Noah Cross (John Huston), which means that Katherine is both her sister and her daughter.

Noah Cross was behind all the murders, and his ultimate aim was to control the water supply of Southern California; once the entire region is irrigated, Los Angeles can be expanded from a small town to a huge, wealthy metropolis, making Cross even richer and more powerful than ever.

Though Jake Gittes knows that Cross is the killer, the police suspect Evelyn. Jake promises to protect Evelyn and her daughter from Cross, but he is unable to do so. The police close in on Evelyn in Chinatown, and shoot her when she tries to escape from them.

Evelyn dies; Cross gets away with murder, and takes custody of young Katherine. A heartbroken, devastated Jake Gittes realizes that, for the second time in his life, he has tried and failed to help a young woman he had promised to protect. Jake’s friend, police Lieutenant Escobar, tells him sadly, “Forget it, Jake- it’s Chinatown.” 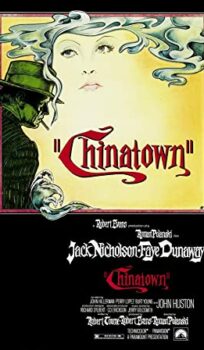