Chip and Dale (now voiced by John Mulaney and Andy Samberg) were once best friends and the stars of their own show, “Rescue Rangers”, but after Dale decided to take another job, the show was canceled, and Chip stopped speaking to him. Over 20 years later, Dale is working conventions alone while Chip works in insurance. They are called together by their old friend and co-star, Monterey Jack, as he is fearful that a group of villains called the Valley Gang are out for him, since they have captured other cartoon characters and are “bootlegging” them, meaning they are being redesigned to make cheap knockoff films. Monty is indeed captured, prompting Chip and Dale to work together to save him.

The duo find the Valley Gang, which is led by Sweet Pete (Will Arnett), formerly Peter Pan but now older, out of shape, and angry that his career went down over the years. He attempts to capture Chip and Dale, but they escape. The two team up with Detective Ellie Steckler (Kiki Layne), who is a big fan of theirs. With her help, they find the warehouse where the toons are being bootlegged, but they find Monty’s mustache and realize he was already bootlegged.

Sweet Pete and his goons go after Chip and Dale, but they only capture Chip. Ellie gets taken as well, because her boss, Captain Putty (J.K. Simmons), is working with Pete. She sends a coded message to Dale, who teams up with old friends Gadget Hackwrench and Zipper to find Chip and Ellie. He helps destroy the bootleg machine, but it turns Pete into a gigantic hybrid of other toons that tries to kill them. With help from Sonic The Hedgehog (the ugly version before his redesign), Pete, Putty, and their henchmen are arrested. Chip and Dale rekindle their friendship, reunite with Monty, Gadget, and Zipper, and later make a reboot of their show. 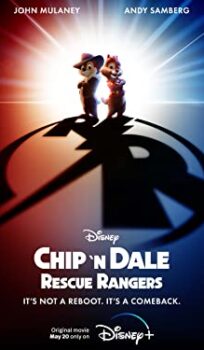