Christine (Rebecca Hall) becomes notorious for staging a televised suicide attempt that costs her her life.

Possibly aside from her mother Peg (J. Smith-Cameron), the only other person truly seen mourning Christine, in the end, is her co-worker and close friend Jean (Maria Dizzia).

Longer version:
After that dinner date George (Michael C. Hall) took Christine on, when he drops her home, he reveals he has been given the promotion to one of the new Baltimore positions created by the network, which further flares up her feelings of inadequacy towards herself and her work. Then, she makes the decision of driving, by herself, to the house of Bob Anderson (John Cullum), the station’s owner and, under the guise of a flat tire, she gets him to talk about work at the station and, eventually, the promotions. It is here she finds out that not only the transfer is happening for George, but he also specifically requested for Andrea (Kim Shaw), the sports girl, to go with him. This makes Christine feel further unappreciated and worsens her depression; she finds herself fighting with her single mother, Peg, over trivial things, and reading through police reports caught by her scanner, yet monotonously and with a lot less enthusiasm than when she first acquired the device. Moreover, she is seen obtaining a handgun.

Her demanding boss, Michael (Tracy Letts) -whom she has never been able to prove herself to, despite repeated, earnest attempts- allows her to do another segment of “Suncoast Digest”, along with George, which she reads through, in a seemingly enthusiastic high. However, a reel of graphic footage Jean would assist her with in playing, as a backdrop for her report, suddenly fails. This has her surreptitiously announce that “the station would broadcast a never-before-seen live suicide attempt”, after which she pulls, out of one of her puppets in her purse, the gun she had gotten earlier, and shoots herself in the head, falling off her chair, unconscious. At first, everyone takes it as a cruel stunt; but when she doesn’t react and is visibly seen bleeding off her head, everyone horrifies and she is rushed to the hospital, later dying of her injury.

The movie ends with Jean assembling a collage of Christine’s news clips for a memorial piece and, then, while at home, eating ice cream while watching “The Mary Tyler Moore Show” and humming to its theme tune, as a way to cope with the grief of losing her friend. 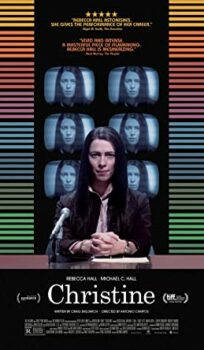