John Carpenter meets Stephen King in the movie version of King’s novel about the evil 58′ Plymouth Fury that winds up in the possession of geek Arnie Cunningham (Keith Gordon).

This film basically follows the book, with Buddy Repperton (William Ostrander) and his gang being individually disposed of by the self-repairing automobile, girlfriend Leigh (Alexandra Paul) almost choking to death at the drive-in and Darnell (Robert Prosky) being crushed in the front seat. Eventually, Dennis (John Stockwell) crushes Christine with a Caterpillar bulldozer in a showdown at Darnell’s garage. Arnie is killed during this derby by a large shard of glass through is gut that is propelled through the windshield. The remains are put in a car crusher, but the crushed block of metal that was Christine moves slightly (or was it the wind rustling a piece of trim?).
Look for Harry Dean Stanton as Rudolph Junkens. 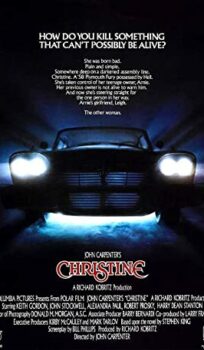