Prince Caspian’s uncle, Miraz, sets out to kill him after his wife gives birth to a son. Prince Caspian is the heir to the throne of Telmarine (aka Narnia 1300 years ago) and Miraz wants it.

He’s given Susan’s horn from the first movie and after escaping Miraz’s guards and falling into the hands of dwarfs, blows it summoning Peter, Lucy, Susan, and Edmond back to Narnia.

The five of them rally the creatures of Narnia to battle the Telmarines. Peter challenges Miraz to a sword fight to the death -winner take all- to give Lucy enough time to find Aslan.

Miraz is defeated, but Peter spares him for Caspian to take his revenge since Miraz killed Caspian’s father (who’s Miraz’s brother). Caspian, not wanting to be like Miraz, spares him; but Miraz is killed by one of his lords to get the battle going.

Narnians win with the help of Aslan, pissed of trees, and a large water spirit.

Afterwards, Aslan tells Susan and Peter that they will never return to Narnia. Three of the Telmarines take Aslan up on his offer to send them to the Telmarines origin (Earth) followed by Pater, Susan, Edmond, and Lucy.

Before leaving, Susan kisses Caspian, who’s had a crush on her the whole movie. 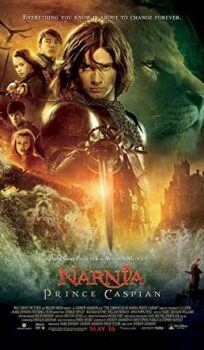