Part One:
He Qiwu aka Cop 223 (Takeshi Kaneshiro) was dumped by his girlfriend May, on April’s Fools Day. As a symbolic gesture, he has begun to buy pineapple cans once a day with the expiration date of May 1st. May does not return, so on May 1st, he eats all thirty cans, before vomiting in a nearby bar. Looking to fall in love, he chats up a mysterious Blonde.

The Blonde (Brigitte Lin) is unbeknownst to him a drug runner whose latest smuggling operation has gone sour. Exhausted, she goes with He Qiwu to a hotel and passes out. He orders food, shines her shoes and leaves. He Qiwu goes running in the rain on his birthday, and dumps his pager, ready to give up on life. However, he receives a message from The Blonde, wishing him a happy birthday. He says he will remember her forever now, and it gives him the strength to keep going. The Blonde meanwhile, murders her boss, who set her up in the first place, removes her blonde wig, and disappears into the crowd.

Part Two:
Cop 663 (Tony Leung) has just been dumped by his flight attendant girlfriend. Faye, the worker at Midnight Express, falls for him. When Cop 663’s girlfriend leaves him a letter and the key of their apartment at the restaurant, Faye takes it and begins to covertly remodel Cop 663’s apartment, secretly improving his life.

Cop 663 notices her in his place one day and confronts her but she escapes. Realizing she likes him, he sets up a date at a local bar. However, the owner of Midnight Express, Faye’s cousin, tells him that she isn’t coming and left him a letter. Cop 663 lets it soak in the rain in anger before hastily trying to dry it out. As for Faye, she did plan to show up but realized that if she didn’t leave for California as she always dreamt of, she never would.

One Year Later, Faye returns to the Midnight Express as a flight attendant to find Cop 663 there. He quit being a cop and bought the place from her cousin. He asks her about California and she notes it was just “okay.” Cop 663 asks her to stay for his opening, but she has a flight in two days time. He asks her to write, but she replies he probably won’t respond. However, he shows her the boarding pass she drew up, and asks if he could get a flight with it. Faye says no, but will write him a new one. She asks where he wants to go, and he replies wherever she wants to take him. The film ends their relationship leaning towards a positive, happy ending. 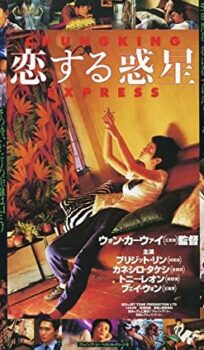