Wichita lawyer and newspaper editor Yancey Cravat (Richard Dix) moves with his family to Oklahoma during the 1889 land rush. He is cheated out of his initial claim, so he moves to town and starts a newspaper. He is unable to settle in one place for very long, though, and disappears for years at a time without letting anyone know where he is, leaving his wife Sabra (Irene Dunne) to raise the children and run his newspaper. After 40 years, she is at a luncheon to celebrate her election to Congress and to participate in the unveiling of a commemorative “Pioneer Statue”. Afterwards she goes on an inspection tour of an Oklahoma oilfield, where it is reported that a roustabout has been badly injured. It is Yancey, and he dies in her arms.

Yancey’s son (Junior Johnson and Douglas Scott as boy, Don Dillaway as adult) is named “Cimarron”, called “Cim” for short (although the movie isn’t about him). He grows up to become an oilfield engineer and marries the Indian hired girl/Osage princess Ruby (Clara Hunt) over his mother’s objections.

Faithful black servant Isaiah (Eugene Jackson) is killed in the crossfire when a gang of bank robbers shoot up the town. 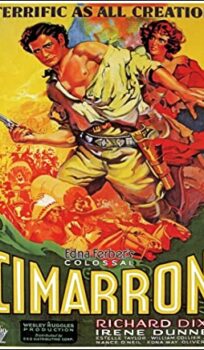