One by one, either through trickery, majority vote, or self-sacrifice, everyone is killed off except three: the little girl, the pregnant woman, and Eric who fought to save the latter two and always said he would sacrifice himself for them if he made it to the end.

As the next vote nears, Eric (Michael Nardelli) warns them that they two will have to agree who lives during the final vote or else it will be a tie and they will both die.

The little girl (Molly Jackson) breaks down and volunteers herself for the sake of the unborn baby. Eric tells her they can step off their platforms and die together. He times it so that the little girl steps off right as the vote happens and instead of sacrificing himself, casts his vote against the pregnant lady (Allegra Masters), leaving himself as the only survivor.

Another vote is called and it seems that everyone was always meant to die, but suddenly Eric is caught in the glow of light that signifies a tie. When the pregnant lady died, she fell so that her baby was over one of the platforms and a tie has been forced between Eric and the baby. Since he can’t vote for himself, Eric is forced to cast his vote against the child.

He wakes up back on Earth. The sky is full of the alien spaceships. He wanders around until he finds a group of survivors like him, mostly made up of women and children. 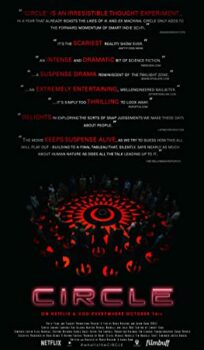