Poppy (Amy and Catherin Quinn). while teething, inadvertently chews up the instructions for leaving the City of Ember that were in the aluminum suitcase. A notched plastic card is also in the suitcase. Mayor Cole (Bill Murray) has no plan for dealing with the failing generator. He is stockpiling food in Room 351 while the populace is starving.When Lina (Saoirse Ronan) tries to report this, she is brought before Mayor Cole who notices she is carrying the aluminum suitcase that was supposed to have be passed from mayor to mayor, but was lost generations ago when that mayor, who was Lina’s great-great-great-etc. grandfather, died suddenly. Just when Mayor Cole attempts to take the case, a brownout occurs and in the ensuing confusion, Lina steals the second half of the plastic key from Mayor Cole that matches the half that was in the suitcase and escapes.

Piecing together the instructions as best they can, Lina, Poppy and Doon (Harry Treadaway) start searching the pipeworks. They discover the lockers are actually boats that can be used to ride the river that powers the generator out of the city. Using the assembled key, they access the generator room and the emergency control station, where they shut down one of the turbines in the river that was spinning, which allows the water level to begin to rise. However, the other turbine jams, restricting the flow. Sul (Martin Landau!) using the Swiss Army knife-type device that Loris Harrow (Tim Robbins) built for Doon gets the turbine started so that the three can ride the wave over the stopped turbine and out of the City.

The turbine shutting down causes a brownout which panics the population. In the ensuing confusion, Mayor Cole retreats to Room 351 and locks himself in, where he is eaten by the giant mutant mole that is hiding there.

Lina, Poppy and Doon find a long staircase at the end of the river and emerge into the outside world at night. They are awakened by a beautiful sunrise and a lush landscape. They drop a rock bearing a note with the instructions to leave the City down a hole in the ground to the distant City of Ember below. The rock rolls to the feet of Loris, who picks it up, reads the note and smiles. 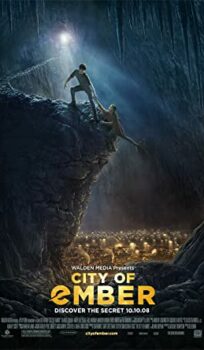