SHORT VERSION:
At Cornell’s trial, Pogue puts on a pair of two-way surveillance glasses while Beth takes the radio for them and prepares to feed him his testimony over it. However, come time to give it, they discover that she accidentally recorded over his testimony with the message she made confessing to him that she isn’t Sarah Novak and was hired by Dr. Doover to scam Pogue out of the valuable coin in his possession because of her resemblance to Sarah, but she came to fall in love with him for real.

Soon after, a wild commotion starts up in the courtroom between a bunch of people Pogue knows, and Pogue gets knocked down and he hits his head on the floor. This causes his memory to return completely, and he tells Beth through the glasses that he earlier hid the coin in a parking meter behind his apartment, so she goes and retrieves it. Pogue then gives his testimony, forcing Cornell to change his plea to guilty and guaranteeing him life in prison.

Pogue meets back up with Beth outside his apartment, and they share a passionate kiss before going inside. It is revealed that Beth has put the coin on the ID tag of Pogue’s dog, Baby.

LONG VERSION:
Pogue (Dana Carvey) sleeps with Sarah (Valeria Golino) two nights before he is to testify against Cornell (Michael Gambon), and the next morning, he wakes up remembering everything from the day before. While thinking about “Baby” and what connection it has to the missing valuable coin, he realizes that his dog answers to the name “Baby,” so he checks Baby’s ID tag and finds the coin hidden inside it as well as a note written by Sarah apologizing for dragging him into her mess with Cornell and telling him that the coin is his if anything happens to her.

He drives Sarah to a payphone so she can call up the ones threatening to reveal to Cornell that she’s still alive if she doesn’t give them the coin, intending to make a deal with them on it. She writes, “I love you” to Pogue in the dirt on one of the phone booth’s windows, and he notices that her handwriting strangely doesn’t match the writing on the note he found. She comes back and says that her blackmailer told her to meet him alone at the Santa Monica Pier. After dropping her off, he finds a way to get close to her without being seen and sees her meeting with Hendrix (Vyto Ruginis), an FBI agent she said was after her, and then leaving with him. Pogue follows them to a beach club, and discovers them meeting pleasantly with Dr. Doover (Michael Murphy), the only one who knows of his retrograde amnesia, and he walks away heartbroken over their betrayals. It turns out Doover, Hendrix, and Sarah had been taking advantage of his amnesia to try to scam the coin away from him and then sell it off for the $7 million it is worth, and Sarah is actually a washed-up actress named Beth Kelly who was hired by Doover because of her striking resemblance to Sarah. Beth feels guilty over what she has done, and when Doover asks for the coin, she pulls out the envelope it is contained in and finds that Pogue had switched it with one of Baby’s tags. Doover tells her that they will have to start the scam anew, but she wants nothing to do with it and walks away.

Pogue returns to his apartment building and learns from the blind guy who hangs out in front of the building that three guys are waiting for him inside his place, and he automatically figures out that it is Cornell and his two main thugs. Soon after, he finds himself getting chased by Hendrix, so he hides the coin inside of a parking meter behind the building just before he gets captured. Hendrix and Doover take Pogue up to his apartment, but the duo find themselves facing the gun-toting Cornell and his goons while Pogue slips away and hides. Cornell has Hendrix and Doover taken to his mansion and interrogated, and after Hendrix tells him that Pogue has the coin, Cornell has them both killed. Pogue tries to get the coin back from the meter, but the presence of a couple of cops sitting in a car nearby stops him from doing so. However, he learns from them that the meter will be emptied at 3:30 p.m. the next day. Beth later goes inside Pogue’s car and explains into one of his tape recorders there who she really is and why Doover hired her, but she is suddenly captured by Cornell’s men when they return to get Pogue.

The next morning, Pogue wakes up having forgotten everything again, and he finds Cornell and his men sitting in his apartment. He is taken to Cornell’s mansion and thrown into the steam room with Beth, where he will be held until it is past 3:00 p.m. when the judge throws out the whole case, and Cornell tells him that when he gets back from court, he must fork over the coin or else he will kill them both. Beth tells Pogue that she took the job with Doover due to being penniless, and he admits that he doesn’t remember her, so she gives him the complete rundown on his situation. They get the better of Cornell’s goons and escape and get to the courthouse just in time, and Pogue puts on a pair of two-way surveillance glasses he owns and Beth takes the radio for them and readies the tape recorder containing his testimony so she can feed him his lines.

Come time to deliver the testimony, Beth discovers that she accidentally taped over it with the message she earlier recorded. Pogue’s Assistant D.A. friend Rosenheim (Kevin Pollak) then figures out that Pogue had slept with his fiancée Judy (Olivia d’Abo) three nights ago and goes ballistic, starting up what devolves into a wild commotion involving Rosenheim and other people Pogue knows. Pogue overhears Beth’s voice on the recorder saying that she really does love him, and then Rosenheim knocks him onto the ground, causing him to hit his head. This fixes his amnesia and enables him to remember everything he has ever forgotten, including Cornell’s crime. He tells Beth where he put the coin, so she breaks the parking meter open and finds it after distracting the meter maid, and he gives his testimony, forcing Cornell to change his plea to guilty and guaranteeing him life in prison.

Pogue returns to his apartment to find Beth waiting outside for him, and they kiss passionately before going inside. It is revealed that Beth has put the coin on Baby’s ID tag. 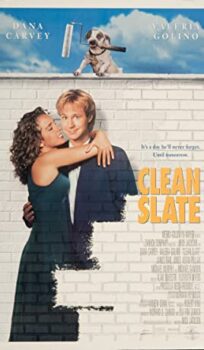